Remember back in May, when the Blue Jays offense had been struggling for a while. They were several games behind the Red Sox, and we were wondering when such a talented offensive team would start to play up to it’s ability. Boy, that seems like a while ago, doesn’t it?

It was May 19th when the Jays made wholesale changes to a lineup that had been mostly stagnant through the first two months of the season. After you look beyond the fact that Justin Smoak was hitting cleanup, the most surprising part of the lineup was Jose Bautista leading off. It was a curious move to those who covered the team. He was a slugger, someone who’d hit third for years, and he was in a contract year. Why had he agreed to lead off? Was it a sign of a team player, someone thinking the team needed a shakeup and putting his ego aside for the team? Or was it something else?

By any measure, Bautista’s 2016 has been a disappointment, both to him, and the Jays. A rumored six year $150 million contract extension demand seems laughable now, after an injury-riddled season that has seen obvious decline for the star right fielder on both sides of the ball. We’ve already looked at his defense on several occasions, and with the Jays falling back to earth on offense, his slide there has been noticeable as well. It could be a fluke, with a shortened season allowing him fewer opportunities to amass the statistics Jays fans are used to seeing. Or, it could be the start of a decline, one that would have made that long extension look bad before he’d collected it’s first payout.

Jose Bautista is widely recognized as an intelligent player, even by detractors who hate that he flips his bat or shows the barest hint of personality. Given that intelligence, one could have wondered back in May if he’d seen something in himself that led to suggesting a different lineup spot, something that made him a more optimal candidate to lead off than to slug home runs. Though he’s hitting cleanup now, let’s take a look at Bautista this year, and see what’s changed from years past.

At first glance, we see a few things that stand out: an increased strikeout rate, a decline in power, and a lower batting average. Whether by age or injury or bad luck, those aren’t incredibly surprising. No matter how much of a fitness freak Bautista is, there’s no outrunning father time. But, there’s an interesting among Bautista’s otherwise declining stat line: his walk rate has stayed about the same. At 16.4%, it’s a hair below last year, but still his second highest percentage since 2011.

This isn’t totally surprising. Patience is a skill that can stay as hitters age; unlike bat speed, foot speed, and other things that rely more on athleticism. But, if the decreased power is a function of his bat slowing, one wonders if teams will start to pitch him more aggressively. He’d earned respect from pitchers by being one of the most accomplished hitters in the game between 2011-2015, making that five year, $65 million extension well worth it.

One of Bautista’s trademarks has always been his ability to turn on an inside pitch, and there are signs that he might not be able to do that as well as he used to. Look at his isolated power, first between 2010 and 2015, and then from this season. 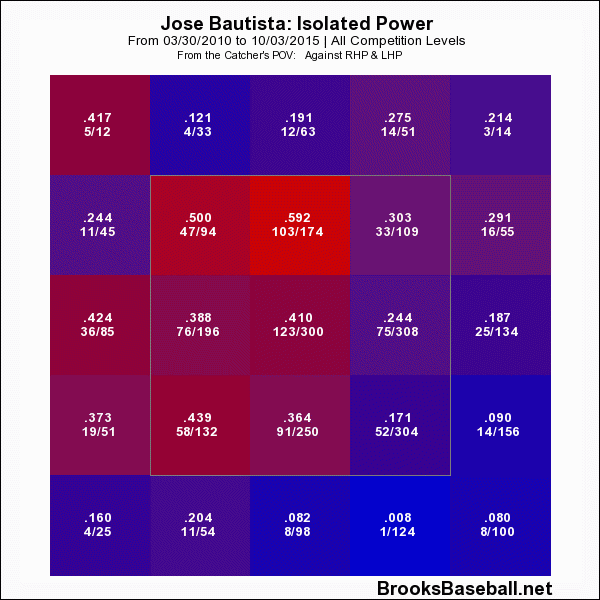 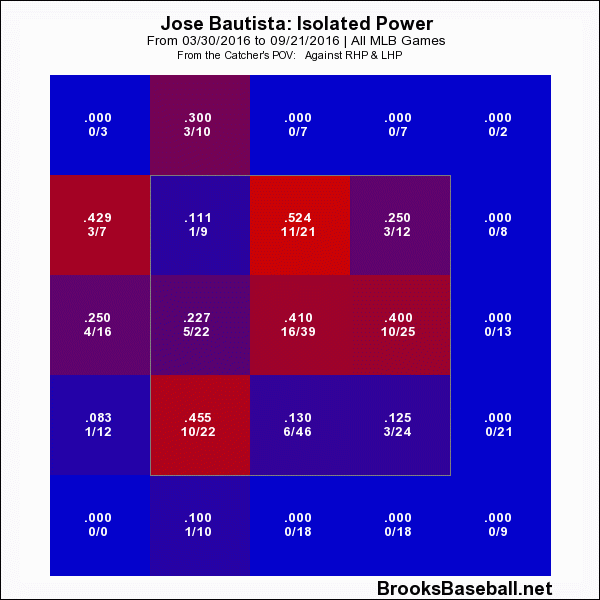 With caveat of a smaller sample size in 2016, there’s still potential trouble brewing in what we see there. If Bautista isn’t able to turn on that inside pitch as well as he used to, then pitchers won’t be afraid to throw inside. Then he might cheat to try to catch up, and pitchers could throw more breaking balls and watch him swing over them, and so on and so forth. The basic gist is that an inability to turn on the inside pitch may lead to the fall of his last great stat: his walk rate.

With that said, Bautista’s relative decline hasn’t led to a change in how pitchers approach him yet. Everyone’s still using the Rangers/Royals playbook from the 2015 playoffs: pounding Bautista low and away, refusing to give him much to hit on the inside. It’ll be interesting to see if they see any struggles on that inside pitch, and adjust accordingly.

Nevertheless, he bounced around before finding a home with the Jays, became an all-everything slugger, and outperformed a contract that nearly everyone in the business questioned the moment the ink was dry. The chip on his shoulder hasn’t left, and there’s no doubt he’s used it as motivation, silencing skeptics with every bat flip and stare down. A smart, talented hitter probably has a few big moments left in him yet. We just haven’t seen them yet.

Tags: Jose Bautista |
Dave Church
Follow @dave_church
Dave is a resident of Calgary, Alberta, and a lifelong fan of the Blue Jays and baseball, having lived near Toronto around the LAST time it was hard to get tickets to Jays games.
read more from Dave Church