The Blue Jays entered play Tuesday night with a record of 21-20, sitting over .500 largely due to the incredible performance of their bullpen. The unit as a whole has a 2.78 ERA, which ranks first in the American League. Leading that relief corps are three veteran relief pitchers: Seung-hwan Oh, John Axford, and Tyler Clippard. These three have combined to allow a mere nine earned runs across 61 1/3 innings, good for an ERA of 1.32.

If anybody were to tell you they expected this level of performance from Oh, Axford and Clippard, they’d either have to be related to one of those pitchers or delusional. These were all pitchers on the wrong side of 30, coming off career-worst seasons. But while we often discount the value of “veteran presence,” the experience and understanding of their stuff that these three have gained over the course of their long careers has given them the ability to adjust the way they attack hitters and bounce back from their struggles. And they’ve all done it in different ways, which is what makes this so fascinating.

It’s interesting to start with Axford, as unlike the other two pitchers on this list, the 6’6” Canadian has seen no significant dip in velocity over the last few years. In fact, his cutter has seen a significant increase in velocity, going from an average of 89.8 mph in 2015 to 92+ each of the last three years (93.0 this year).

However, this is where the ability to understand one’s repertoire really comes into focus. If you take a look at Axford’s fastball usage, you’ll see something rather obvious: 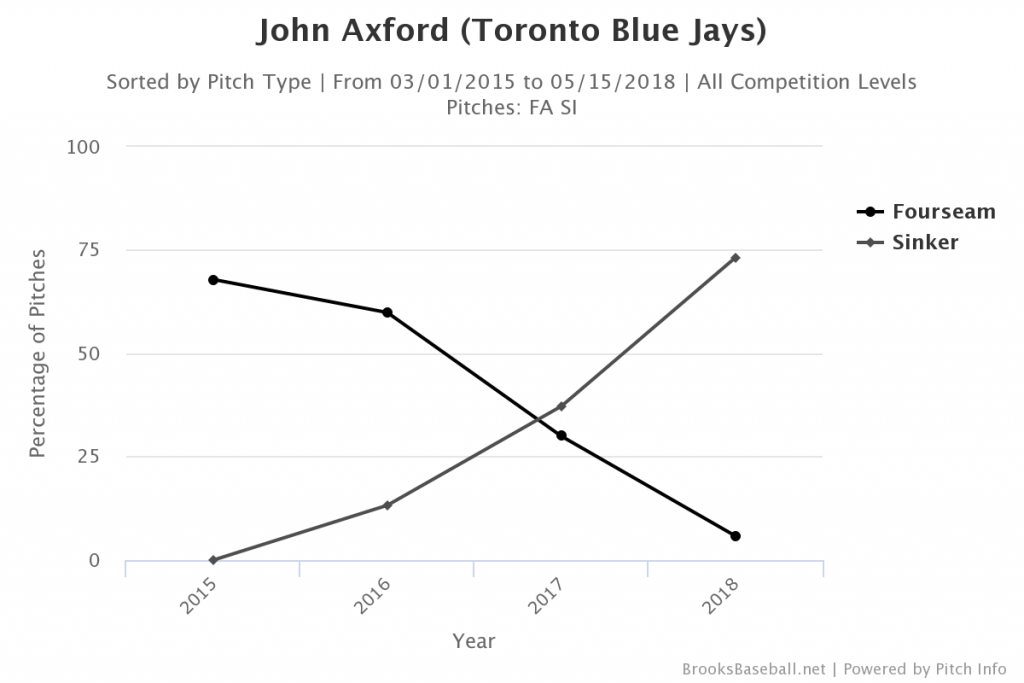 Starting in 2016, Axford started throwing a sinker. Considering all the success he’d had in the past, I was very curious why he made the switch. Here’s what Axford had to say when I asked him in spring training:

“The slider/cutter thing that I’m throwing now seemed to have a little tighter and harder action… So that action just needed a little bit more play of something going the other way. I noticed that some guys seemed to be on that fourseamer a little bit more and staying off the curveballs when I was dropping them behind the plate, recoginizing it if was going to be in the zone. So I thought of utilizing something else, like a twoseamer, to play with and it worked in ’16.”

As you can see below, the slider clearly morphed into the power cutter over the past few years (vertical movement on the left, velocity on the right):

When introducing the sinker to offset the glove-side movement of his cutter, Axford saw immediate results:

“I think I want to say that the first or second time I ended up doing it, in ’16, I think I threw two innings in Houston and think I struck out five guys. So I was like, ‘I’ll deal with this. I think I can keep doing this for a while.’”

That was the start of Axford’s transition into a partial sinkerballer. And despite a small mid-summer blip, he had a very solid year for the Oakland A’s.

“I threw two innings in Houston and think I struck out five guys. So I was like, ‘I’ll deal with this. I think I can keep doing this for a while.’”

So what happened  in 2017, when things got so bad that Axford nearly walked away from the game? The tall righty was initially hesitant to even think about what led to such an awful time: “Last year, I can’t account for really for anything. Because nothing really went well.” But when he considered the idea further, he realized that he allowed bad luck to influence his pitching style.

In his final apperance in May last season, Brett Gardner hit a two-run double that drove Axford’s ERA up to 8.31 after four appearances. Axford felt that he needed to make adjustments, so he altered his approach again. Take a closer look at that sinker usage chart, broken down by month: 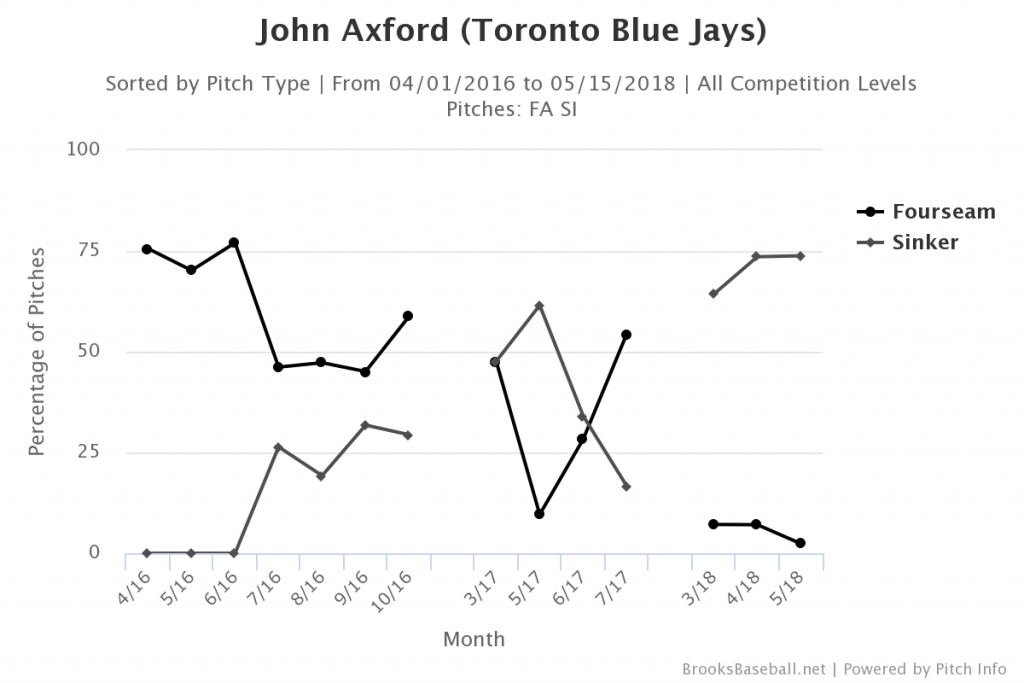 After the initial success in 2016 and heavy usage in May of 2017 (ignore the March data, as that is from a spring training game), Axford reverted to throwing more fourseamers. He then posted an ERA of 5.94 the rest of the way. Now look at the box score line for that Gardner double:

Yes, you read that correctly: a double to left field on a fly ball to deep third base. Gardner just threw his bat at the ball and hit a bloop, two-run double. But this is where the mental side of the game comes into play. Axford was thinking results were the issue, even though his process was good. So he tried to change things too much and, by his own admission, let things snowball.

Thankfully, Axford realized what had happened. He was able to take stock of his lost season and his mental approach to the game. And that’s why he entered the spring ready to do what his experience and understanding of his stuff told him to do. He’s aware that his sinker/cutter combo at his velocity makes him very hard to hit, even if sometimes the baseball gods aren’t smiling down upon him. That’s why he entered this spring with the sinker as “something [he was] going to be working on again this year.”

So now you know why you see John Axford throwing nearly 75 percent sinkers, and why he is one of only two relievers on this team who generates groundballs over 50 percent of the time (Jake Petricka is the other). He understands what makes pitching easier and what makes hitting tough.

When this season started, things looked even worse. Oh’s fastball velocity had dropped over two miles per hour, and he was habitually escaping innings by the skin of his teeth. In short, he looked like he might be done. 18 2/3 innings later, Oh has 20 strikeouts, just three walks, a career-best infield-fly rate (12 percent), and looks every bit like the star he was in his debut in St Louis.

So what is Oh doing? Like Axford, Oh has changed his pitch usage to suit his new stuff. 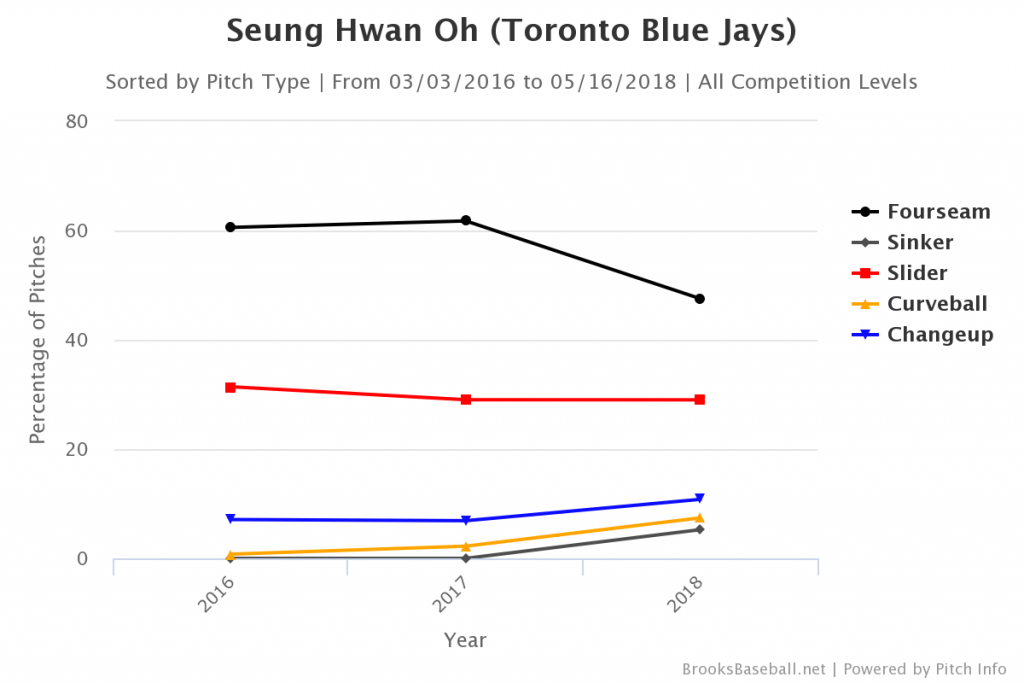 As you can see, Oh is throwing his fastball considerably less often than he has in the past (from over 60 percent in 2016-17 to 47 percent so far this year). This could’ve been a problem if the Korean hurler was having the same problems with his changeup that led lefties to torch him in 2017, but that’s no longer the case: 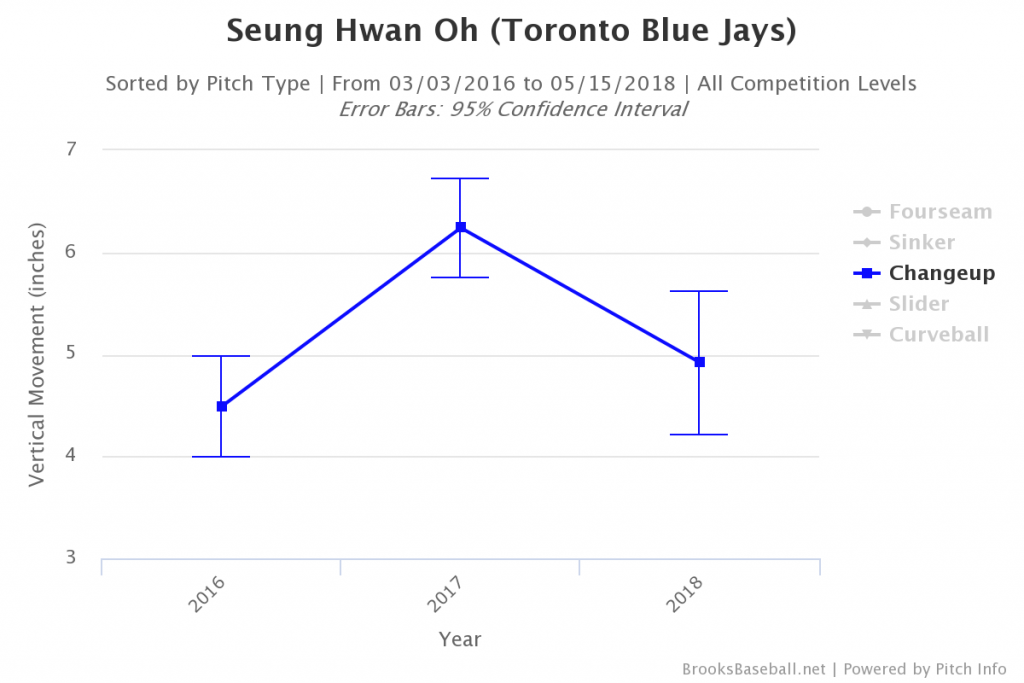 With the changeup now reverting to its diving form, Oh is now not only able to get lefties out, but possesses two offspeed pitchers — the changeup and a slider — that he can throw to the bottom of the zone. This helps the fourseam fastball play up, even with its reduced velocity, as long as it is used properly. 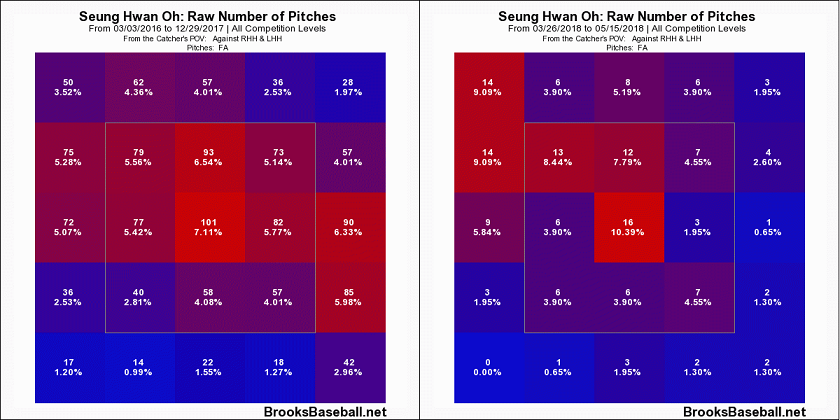 As you can see above, Oh is now attacking up and to the arm side with his fastball, counteracting the glove slide movement of his slider and the downward action of his changeup. When combined with the drop in fastball usage forcing hitters to wait back for a non-fastball, this is leading to a lot of swinging strikes and lazy popups on 91-92 mph fastballs.

I wrote about what Clippard was hoping to fix things back in spring training, and if you’re curious what he’s doing and why it works so well, you should check that out. If you’re too busy though, here’s the choice quote:

“I need to get back to throwing more fastballs.”

It doesn’t get much simpler than that — Clippard himself called it “pitching 101.” But it eluded him in 2016, when, for the first time in his career, his splitter/changeup rate had eclipsed his fastball rate. Not the case this year: 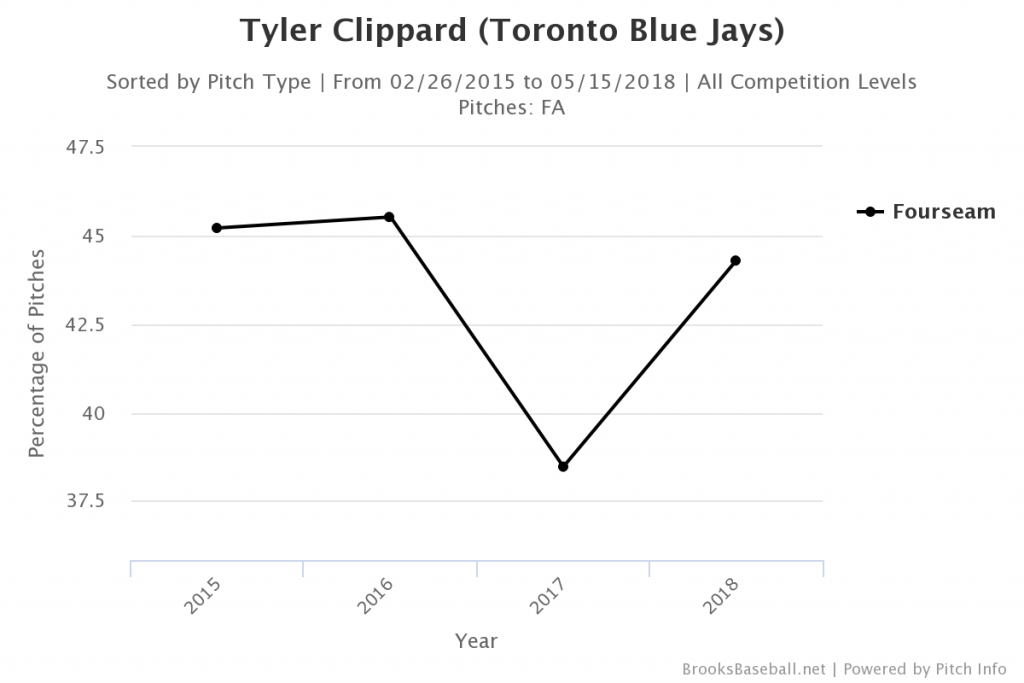 In short: Clippard is doing just what he said he was going to do.

With the return to around 45 percent of his pitches being his high-rise fastballs, Clippard is once again throwing them just as often as his combined usage of the splitter/change. This keeps hitters from sitting on any one speed, which is helping both pitches play up.

Will these three pitchers continue to post ERAs in the low 1.00s? Almost certainly not. That’s hard to predict for anybody. But the adjustments made to improve their ability to get outs despite changes to their stuff suggest that as long as the workload from the lousy starting pitching doesn’t kill them first, top-level performance could still be the norm for the veterans in this Blue Jays bullpen.