You could probably be forgiven if you forgot that Jason Vargas was in the league. The soft-tossing lefty signed a four year, $32M contract with the Royals prior to the 2013 season, but missed most of 2015 and 2016 following UCL-replacement (or Tommy John) surgery. Even before going down, Vargas was basically a control-specialist, innings eater. He didn’t strike many batters out, but he went deep in games and provided roughly league average production (ERA+ of 97 from 2009-2014). That’s not the type of pitcher who often garners notoriety.

Since coming back, however, Vargas has been nothing short of excellent. After three great starts in September of last year, Saturday’s starter has dominated the AL in the first 2.5 months of 2017. He has posted the best strikeout rate of his career (19.4%), along with the second lowest walk rate (5.7%) and the lowest HR/9 (0.62).

While there is certainly some element of luck there (his HR/FB is a career low 5.3% despite being up across baseball), most of the underlying metrics like what Vargas has been doing. As part of his 10-3 record and 2.27 ERA, Vargas owns a 3.23 FIP and a 3.86 DRA, both of which are well above average.

The most noticeable change for the pending free agent from this year to last has occurred with his pitch mix: 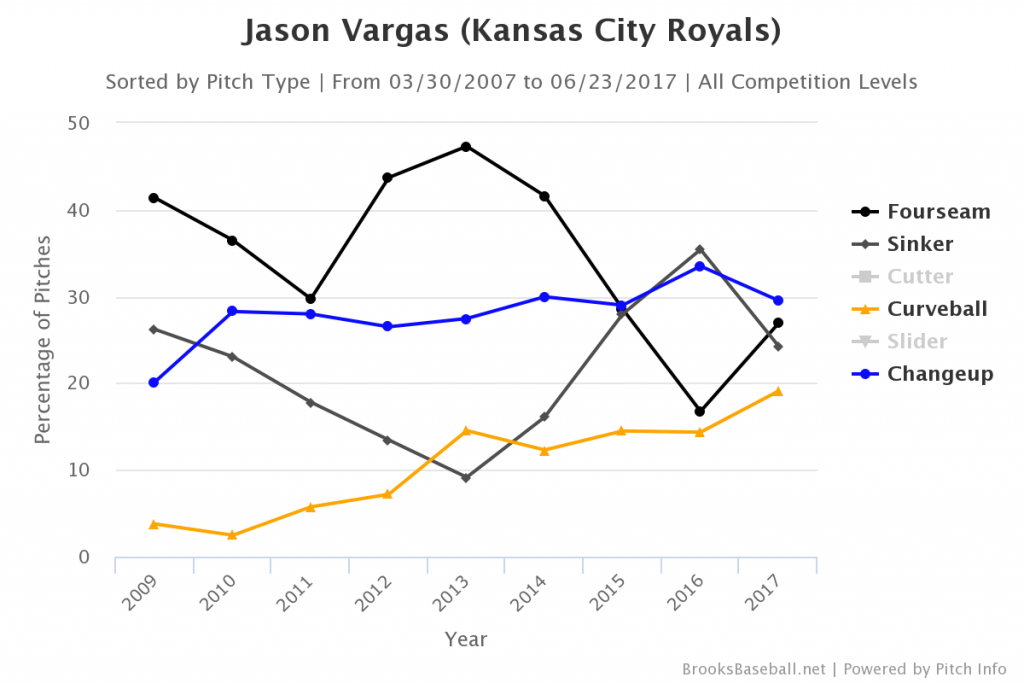 In the past, Vargas has always had one or two pitches that he would go to above all others, but this year he is throwing everything with very similar frequency. The usage gap between his most (changeup at 29.5 %) and least used (curveball at 19.1%) offerings is just 10.4 percentage points, which makes it very hard for a hitter to guess what is coming. That ability to keep hitters off balance, combined with Vargas’ very good control is leading to a ton of soft contact. His 2.3% Barrel rate (barrels per plate appearance) is third lowest in all of baseball.

Unfortunately for the Jays, their lineup setup also plays right into Vargas’ strengths. As one might expect from a pitcher whose primary pitch is a changeup, Jason Vargas has reverse platoon splits this year. While he has been mostly neutral for his career, the change in pitch mix has led to drastic differences vs righties and lefties. RHB are struggling mightily, with a line of .218/.276/.302, while lefties has crushed Vargas to the tune of .329/.338/.507. Unfortunately, the Jays’ only lefthanded hitters (Smoak and Morales will not bat left-handed against Vargas) are Ryan Goins and Dwight Smith.

This could be a tough matchup for the visiting Jays.

While Blue Jays fans have become enamoured with first baseman Justin Smoak and the offensive prowess he has displayed thus far, prompting them to jump aboard the #VoteSmoak train (or the newly announced #SmoakTheVote), it is the Royals’ Eric Hosmer who currently leads AL first basemen in All-Star voting.

That being said, Hosmer has not fared well against the two Jays’ lefties he’ll face this weekend, although the sample size is extremely small. He’s one-for-six lifetime versus J.A. Happ while being 0-for-3 against Francisco Liriano.

Working in the Jays’ favour is the fact that Hosmer has cooled off this past week, batting just .167/.304/.389/.693 over the past seven days. Throw him a breaking pitch and he just might whiff on it.

Top of the Order Transition

After scoring the fourth most runs in the American League last month, helping them go 18-10, the Blue Jays offense has disappeared again. Toronto went from slashing .263/.332/.477 as a unit in May to a measly .242/.317/.432 through their first 18 games in June. Runners being stranded and poor BABIP luck was a major focus, but the situation at the top of the order became impossible to overlook. Jays fans throughout May pondered ways to get Kevin Pillar to the All-Star Game. By June, they watched in agony pleading for Pillar to be moved near the bottom of the lineup. It took him a while, but manager John Gibbons listened and announced that Jose Bautista and Russell Martin would be hitting one and two for the club for the foreseeable future.

Since the beginning of the 2014 season – among players with at least 600 plate appearances – both players are in the top 30 league-wide in walk rate, with Russell Martin ranking 26th and Jose Bautista 4th. Even when both players seemed to struggle at the plate to begin the 2017 season, they still found ways to get on base.

One thing to pay attention to is who Russell Martin is getting on base in front of. Per Baseball Reference, Martin has 90 plate appearances hitting sixth in the order this season, the most of any other lineup slot. The number 7 spot* has been the most unproductive slot in the lineup for the Jays so far this season. Just for reference, the seven spot in 2017 has slashed .179/.253/.292, which is even worse than Ryan Goins career mark of .222/.271/.329.

Martin will now rely on guys like Josh Donaldson (if healthy) and Justin Smoak to cash him in, instead of the likes of Darwin Barney, Ryan Goins, and Chris Coghlan. If he and Bautista are able to get on in front of the two most productive hitters, the Jays could see their fortunes rise.

*Martin has also started 12 games this year hitting seventh, but Ryan Goins, Darwin Barney, and a struggling Devon Travis have made up for a large chunk of at bats in that slot.