I wasn’t watching the game last night. I was cursorily following along on Twitter when I saw that tensions between Atlanta and the Blue Jays were getting high. It started because Jason Motte quick pitched, and in response, Kevin Pillar appeared to have yelled a homophobic slur at him.

That’s unacceptable. That should be grounds for a suspension, or a large fine at the very least given MLB’s insane punishment rules.

After the game, Pillar spoke to reporters and owned up to his alleged actions, calling them “stupid”, “immature”, and “uncalled for”. He also said that he would apologize to Jason Motte for what he said.

That is where Pillar messed up for the second time.

His apology should not be limited to Motte or the Braves. He must also apologize to the LGBTQ2 community and his fans for what he appears to have said last night. Motte is not the one who has been marginalized and targeted for years because of his sexuality. It does not matter if it was a “heat of the moment” thing, because no situation should arise where a person says such a word. There are plenty of “bad” words that could have been used in that situation that would not come with the awful history and offensive nature of the word he did use.

Baseball perpetuates a culture of toxic masculinity daily with the “no crying” mentality that is so dominant in today’s game, and this is just another example of that unfortunate reality. I have only been in a major league clubhouse as a reporter a few times in my life, but it doesn’t take more than five minutes inside of one to realize that these grown men that we idolize in our society are not the greatest role models. Unfortunately, the “locker room talk” phenomenon is real, and because of it, “mistakes” like the one Pillar claimed to have made last night are going to happen. Thus the excuse of anger does not hold up, because in reality, we are aware that this word is only in his vocabulary because it has a life around him.

In September 2012, then Blue Jays shortstop Yunel Escobar had played a game with a homophobic message written on his eye black. It was caught on camera, and he was suspended three games, while the Blue Jays donated his salary from that time frame to You Can Play and other organizations. In his apology, Escobar said he and his teammates were shocked at the outrage because the word is a joke. Omar Vizquel said, “it’s a regular word for us that we use all the time.” This is the same problem that still exists today, almost five years later. The culture has not changed.

Pillar slipped up a third time as well. He claimed victim status in his statement. “Something to move on from”, Pillar told the media, continuing with “don’t let it define me”. This isn’t about him. It’s about the culture around him, and how his usage of the F-word, even if he is the most tolerant and accepting person normally, represents the problem. It perpetuates a culture of homophobia. Sure, Pillar can move on from this without any further statement or action, but that would be the wrong thing to do. He has that option. Unfortunately, the people he hurt while using that word do not. They will still be mistreated in society like they have been their entire lives. Pillar can pretend like this never happened, or, like he also said in his statement, he can make this “something to learn from.”

Pillar did something regrettable, and so far, he has owned up to it. However, that isn’t enough. When one makes a mistake, they need to show that it truly was a mistake. One word does not define a person. But acknowledging the negative power that a word can have and why it was a mistake to say it, is what defines a person. So far, Pillar’s apology sounds a lot more like he is sorry for getting caught than he is for using the word.

If Kevin Pillar is truly a good person, he will apologize not only to Jason Motte and the Braves, but to those who were impacted by this incident. Along with that, he should utilize his platform as a professional athlete for good, and make contributions, be it monetarily or through appearances and public support, to organizations that impact the lives of LGBTQ2 people.

Kevin Pillar is idolized around Canada because of how he plays. He is a fan favourite. If he is concerned about this incident defining him, then he should make it define him in a positive manner. Show that it was just a “heat of the moment” thing. Show that he is better than the history of the word. But he shouldn’t just move on from it and pretend like it didn’t happen. Not everybody is lucky enough to have that choice. If Pillar doesn’t do these things, it’s up to us to make sure he knows that is wrong. We cannot forget this incident the next time he makes a shiny catch or hits a big home run. Baseball is just a game. Peoples lives are more important.

Update: Pillar issued the following apology this afternoon via tweet: 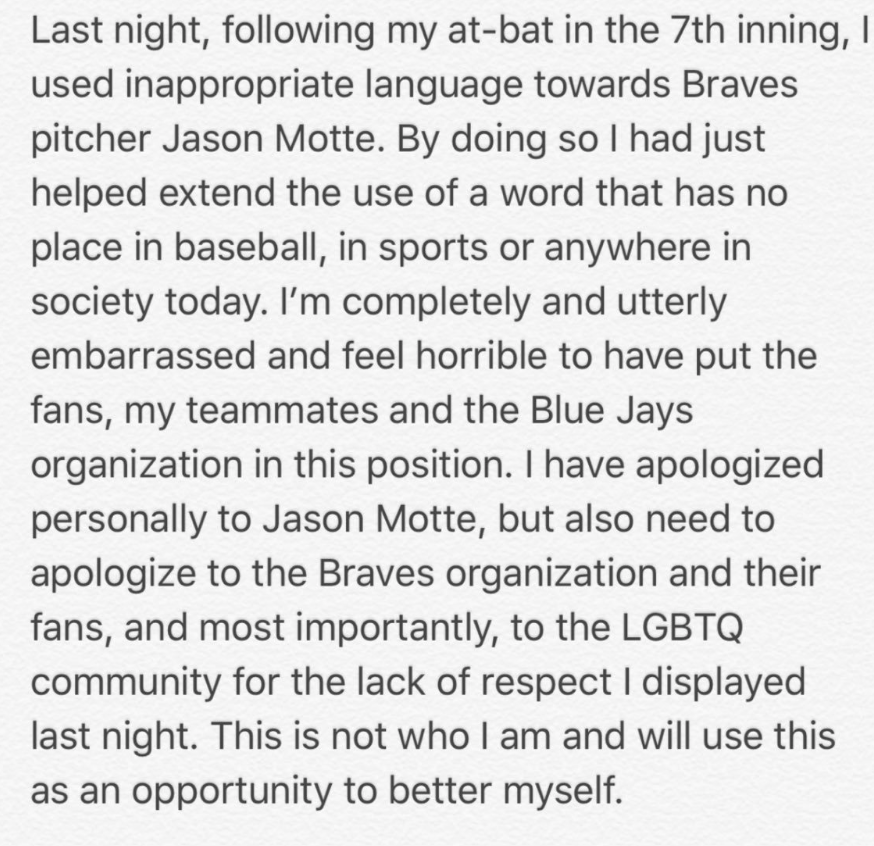 In terms of an apology, that is what you want to see. He admitted his wrongdoing, apologized to the community he offended, and said he wants to better himself. A punishment from MLB and/or the Blue Jays is still likely, and I imagine we’ll hear about that in the coming days.

5 comments on “Kevin Pillar Needs to Do Better”

Couldn’t agree more with this piece, Gideon Turk. I miss you tweeting me too.

KP was wrong. But Gideon et al are wrong too. I’ve seen hundreds of Twitter hot takes and dozens of blogs/articles in the last 24 hours, all quick to reprimand KP and demand atonement.

Gideon’s sins:
1) assumes moral superiority: ” it’s up to us to make sure he knows that is wrong”
2) place conditions on KP’s ultimate moral goodness: “If Kevin Pillar is truly a good person…”
3) impatience: “that isn’t enough”
4) enumerate a list of demands: “he should utilize his platform…”

Does KP deserve a rebuke? Of course. Does he need a public rebuke? Sure. But does he need it from you? Probably not. He certainly doesn’t need a Twitterstorm of Disapproval before he even has a chance to really reflect on what happened, or before those who are more properly in the position to rebuke him have a chance to do so, e.g. his boss or his wife.

The proliferation of social media has wrought a culture where everyone feels entitled to voice their immediate moral judgments on others, people to whom they have no connection. We should all be a little more careful about when and against whom we cast moral aspersions.

The reaction to this has been so remarkably outsized. Was it a nasty thing to say? Sure. Were some folks potentially a little offended it hurt? Maybe. So let the man apologize and yes, move on. Demanding blood and public service and whatever else is an amazing overreaction.

But at least it’s a good opportunity for people to jump on their soapbox while polishing their Halo.

Are you lesbian, gay, bisexual, transgender or someone at another other place along the gender/sexual identity spectrum? If no, it’s not down to you to decide what’s an overreaction and what isn’t.

It’s a word born out of hatred of homosexuals, and meant to make homosexuals feel threatened. It’s a word used a million times a day in schools and workplaces to bully gays, often to the point of depression and suicide. The ‘It Gets Better’ campaign was born out of youths killing themselves because of the ubiquitous nature of anti-gay bullying, often with the complicity or complacency of homophobic teachers and parents. The word ‘faggot’ is in an integral part of that bullying and hate.

So excuse me if I don’t think that someone using that word on national television, as an employee of an organisation that is notoriously hyper-macho, intolerant of difference, and terrible at encouraging LGBTQ inclusivity, which has yet to have an openly gay player, is not a big deal.

Do I think Pillar should be drummed out of town? No. But I think all baseball players should be made to appreciate that not only is the word unacceptable, but the attitudes that give rise to it are unacceptable, and that MLB and the Blue Jays should do a much better job of reaching out to and encouraging open participation by LGBTQ fans in their cities, and, yes, that the gay players, couches and staff that undoubtedly exist should be encouraged to come out.