Every week in this space, we’re going to be running down the “Hitter of the Week” for the Toronto Blue Jays. This won’t always be the best hitter, but it will always be someone who did something notable that we can break down further. Using information from games through Friday (Saturday-Friday), we will try to show you something interesting each and every week.

Last week, Andrew Munn gave Kendrys Morales the nod as BP Toronto’s second ever Hitter of the Week. Morales earned the honor on the back of a sorely-needed walk off home run, and while he delivered another clutch blast this past week the title will change hands.

When you think of the Blue Jays lineup, you automatically go to the big boppers. Justin Smoak. Darwin Barney. You know the drill. Unfortunately for those two, the third recipient of Hitter of the Week honors is Kevin Pillar, who enters Monday with an 11 game hitting streak that includes three home runs and five RBI. Since the weekend games don’t count for our HotW window, Pillar’s numbers from Saturday the 15th to Friday the 21st read as follows: .393/.393/.643 with 11 hits, four doubles, a homer and two RBI. That’ll play.

John Gibbons took some flak for using Pillar atop the order last season but he’s more than earned the right to lead off this year, having collected seven more hits in the first 16 games in 2017 (22 total) than he had in the same span last year. As our own Gideon Turk noted back in spring training, Pillar’s bringing a newfound discipline to his at bats, and to this point it has been paying off even if his strikeout and walk numbers don’t look all that special. With the obvious caveat being that we have a very small sample for 2017, here’s what we’re working with:

That’s good stuff. Pillar is chasing less and attacking strikes more often than he ever has as a full-time big leaguer and it looks like he’s more apt to go up the middle to boot. There’s some chicken-and-egg debates to be waged about that, but there’s a definite spike in balls hit to the center of the diamond:

Making that more impressive is the fact that Pillar has been seeing fewer fastballs than he’s been accustomed to so far, as opposing pitchers might’ve read up on the old free-swinging KP rather than the new deluxe version:

As for the past week, Pillar has done very well to limit his swings on pitches outside the zone, as the data above would indicate. For reference, here’s his swing chart from last season (left) against what he did as Hitter of the Week (right) from the catcher’s point of view. While Pillar still seems tempted by inside pitches, there’s a lot less red outside of the strike zone. 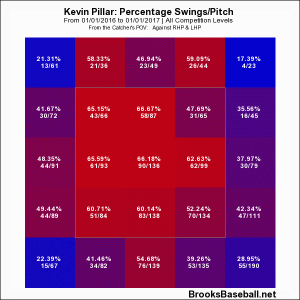 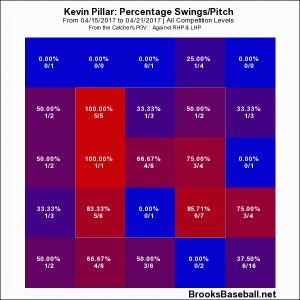 The kicker? Even when he was caught chasing, he wasn’t swinging and missing very often at all. Pillar has always excelled at making contact outside the zone, and now he’s still putting the ball in play even when pitchers catch him fishing.

These are early returns, to be sure, but Kevin Pillar looks to be in the process of putting it all together if he hasn’t done so already. He’s chasing less despite facing a higher percentage of breaking pitches and the Jays are looking at a definitively improved hitter, even if BABIP has been on his side so far. That’s Hitter of the Week material.

Tags: Hitter of the Week, Kevin Pillar, Toronto Blue Jays |
Mike Passador
Follow @Mike_Pandador
Mike was born and raised in New York and wound up at Boston University in his quest to avoid Yankees coverage. He graduated from BU's Dual Degree Program, receiving a BA in Economics and a BS in Business Administration with concentrations in marketing and operations management. A fan of all Toronto sports (plus the Detroit Lions), he is prepared for disappointment but always keeps his head up.
read more from Mike Passador