Injury chased their starter early, but Cleveland’s bullpen continued to have an answer for every Jays threat. Toronto would never take the lead, falling 4-2 in the game and are now down 3-0 in the series.

Cleveland drew first blood on a Mike Napoli double, but Toronto lashed back in the bottom of the 1st. After throwing just 19 pitches, the blood gushing from the drone-inflicted wound on Trevor Bauer’s pinky became to much to ignore. Two pats on the cheek from Terry Francona and Bauer’s night was done.

If Cleveland goes on to lose this series, they’ll be calling it The Curse of the Dronebino.

Dan Otero warmed up in a hurry, and quickly served up a homer to Michael Saunders to knot that game at 1-1 in the 2nd. It looked like things would start to snowball out of control for Cleveland; you can’t throw Andrew Miller out there in the 3rd and the Jays would feast on the no-name back end of the bullpen. That’s how it played out in my head.

Instead, the Jays were shut down by guys named Jeff Manship and Zack McAllister, and Napoli crushed the first pitch he saw in the 4th into the stands to put Cleveland back on top. With Cleveland comfortably leading in the 7th, the air went out of the Rogers Centre as fans waited for Andrew Miller to jog in.

But instead in came Bryan Shaw, and then Cody Allen, and with a rally brewing in the bottom of the 7th Miller remained seated. Shades of Zach Britton. Donaldson stepped up to the plate with men on second and first and hit the first pitch from Allen right on the money, which in the 2016 ALCS means right into Coco Crisp’s glove.

Andrew Miller finally came in with two outs in the 8th, and did what he does. It took seven pitchers – and 149 pitches - to win the game for Cleveland. A lot of the credit’s going to go to Francona for “pulling this one out of a hat” after Bauer’s pinky busted open in the 1st, and that’s deserved. He’s consistently gotten the matchups he wants, and he’s been aggressive on the basepaths and with defensive positioning.

Make no mistake, though, this game wasn’t won by Cleveland, it was lost by the Jays’ bats.

Top Play of the Game by WPA

Jason Kipnis’ go-ahead homer in the 5th was worth +0.163 WPA. According to Statcast, the dinger was clocked at 107.3 MPH – the fastest ball of Kipnis’ bat all season.

Bottom Play of the Game by WPA

Pillar’s strikeout in the 9th lowered the Jays chances of winning by 7.7%, but we won’t hold it against him.

We knew it would be bad, but not this bad. After Rajai Davis burned up the basepaths to score the game-winning run in Game 2, Coco Crisp got things rolling early against Stroman in the 2nd. He stole second without a throw, and then pressured a wild pitch that allowed him to get to third base.

I understand that the Jays rotation isn’t going to give up the count to a batter in order to focus on controlling the running game, but they could at least feign interest. Crisp took the kind of lead you take when you know the pitcher isn’t paying attention, but if Stroman had glanced over he would’ve had him picked off easily. Even Mike Napoli got in on the action, taking advantage of a pitch in the dirt to swipe a bag.

The Ever Changing Strike Zone

The strike zone was once again a point of contention early on, as Brian Gorman was all over the place. The problem wasn’t so much accuracy, but consistency. One moment he would be calling the inside fastball a strike, next moment it would be a ball. Seemed to go both ways, though, but a called strike against Michael Saunders stands out on the left of this graphic. 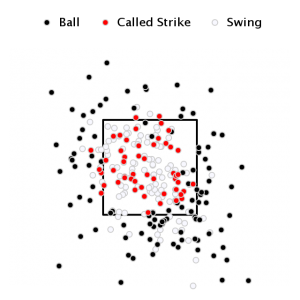 In an in-game interview right after Bauer was forced to leave the game, Francona said Kluber would be starting Game 4. It’ll be short rest, but who better to hand the ball to in an elimination game than last year’s Cy Young winner? (I mean, yes, Andrew Miller would be better.) Aaron Sanchez will toe the hill for the Jays at 4 p.m. EST.

Tags: 2016 Toronto Blue Jays, ALCS, Cleveland, loss Trevor Bauer, playoffs |
Elie Waitzer
Follow @@PopOfTheGlove
Came up watching Lyle Overbay and I still haven't come down. Looking for someone to watch all 10 Innings of Ken Burns' Baseball with, consecutively in one sitting. Find my other baseball ravings at glovepop.wordpress.com.
read more from Elie Waitzer