The Blue Jays offense has been terrible through the first 35 games of the season. There is no denying it. Save for a few arms, the bullpen has been a severe letdown. They have allowed inherited runners to score at an astounding pace. Wins that look all but locked up have slipped away. The Jays do not deserve to have a winning record (18-17). The fact that they do, is entirely attributable to the starting rotation. Once believed to be the weak link in the chain, the rotation has proved to be anything but. The brilliance the Jays rotation has displayed is drastically overshadowed by the inadequate performance from the rest of the team. Let’s compare Toronto’s rotation to the rest of the league and assess if this type of consistent performance is to be expected for the remainder of the season.

Generally speaking, a good starting pitcher will consistently go deep into ball games. A few things contribute to how deep a starter can get into the game. First, they have to be able to suppress the other team’s offense. Secondly, in this day and age where arbitrary pitch limits rule all, a pitcher has to be able to keep their pitch count down.

Thus far, the Jays rotation ranks first in innings pitched. They have pitched 227 innings through the first 35 games, which is 6 1/3 innings per night. The last time a Jays starter did not register at least seven innings of work was on May 3rd when Marco Estrada went six and was pulled for precautionary reasons (he had allowed two hits, one run and had thrown 88 pitches). So, how are the Jays starters drastically outperforming everyone’s expectations?

They certainly aren’t blowing anyone away by striking them out. The team ranks 27th in strikeouts per nine with 6.9. Other top rotations in the game are much closer to a strikeout per inning; Rays (9.4) are first, Dodgers (9.0), Nationals (8.6), Mets (8.5) and Giants (8.5) are all near the top of the league. The Jays can be mentioned in the same breath as the Astros (6.7), Rangers (6.7) and Brewers (6.4). It appears that Toronto is making a calculated tradeoff when it comes to strikeouts. They are effectively getting less strikeouts in return for more ground balls. The club is inducing ground balls over half of the time, 50.6% which is good for 2nd in baseball. The ground ball brigade is led by Stroman and Sanchez, respectively they have induced ground balls at a 59.9% and 59.2% rate. This is good for 2nd and 4th in the entire league…pretty impressive for two pitchers whose average age is 24. As you can see in the graph below, not many teams are as pronounced as the Jays when it comes to getting as many grounders and as few strikeouts. The Jays sacrifice strikeouts in return for grounders but do they gain anything in addition to the grounders? 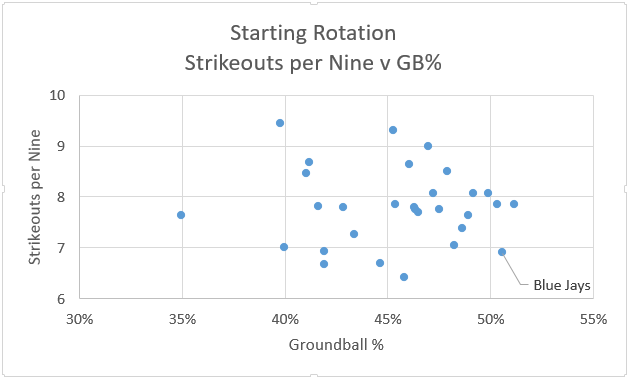 So far this season, as a rotation, the team ranks 3rd in pitches per plate appearance (where lower is seen as a positive). As a unit, they throw 3.76 pitches/PA. This is most likely a direct relation to the ground ball philosophy the rotation has taken to heart. With the exception of R.A. Dickey, every member of the staff has a go-to pitch that displays severe downward motion. Stroman, Sanchez and Happ all throw the sinker consistently and Estrada has the changeup that he can go to whenever he wants. They throw it early in the count, put the pitch in the zone and the opposing team drills it into the ground. Opposing teams make contact against the rotation fairly consistently but with such late movement they can’t do much with it. This results in the substantial ground ball rate that we see as well as the low pitch count. This combination is essential for making it late into the game.

The Jays starters have apparently gotten ‘lucky’ as well. They have the second lowest batting-average-for-balls-in-play or BABIP in the league at .265. I am a firm believer that a BABIP on either end of the spectrum can be explained in certain situations. For example, a fast hitter generally has a higher BABIP than most because he can beat out more infield singles than a hitter with average speed. Additionally, a defense can impact their pitcher’s BABIP. If a team’s defense can turn infield singles into outs or make frequent spectacular catches in the outfield, than their pitcher’s BABIP might be lower than most. The Jays infield defense is one of the best in the league, they eat up ground balls like a Dyson vacuum collects dirt. Having said that, no team had a pitching BABIP this low last season, so expect some degree of upwards regressions. Last season, the lowest pitching BABIP was .278, and the team who owned it was….the Toronto Blue Jays. Across both the 2015 and 2016 campaign, the Jays have shown the ability to create weak contact from opposing hitters that generate ground balls. R.A. Dickey definitely contributes to the low BABIP as well, knuckleballers create weak contact resulting in a below average BABIP. I wouldn’t be surprised if a few more balls found holes for the remainder of this season, but it don’t expect the regression to be substantial or even noticeable.

In conclusion, the Blue Jays rotation has seen tremendous success by adopting a ground ball philosophy that negates the allure of the strikeout. Each member of the rotation showcases a pitch that has extreme downward movement. They throw strikes early in the count, forcing the opposing team to swing and pound the ball into the dirt. By doing this, the Jays starters keeps their pitch count down, meaning they don’t hit the arbitrary 100 pitch limit early in the game. The infielders have proven that they can handle the steady stream of ground balls that are hit their way. All of these factors combined have resulted in the Jays starters leading the league in innings pitched and owning the sixth best ERA in baseball. If the rotation keeps inducing ground balls at a high rate, their performance should be sustain over the course of the year.