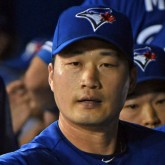 The Blue Jays made a trade during the ninth inning of Tuesday’s game against the Twins, sending reliever Seunghwan Oh to the Rockies for first base prospect Chad Spanberger, Outfielder Forrest Wall, and a Player to be Named Later. Not included, despite earlier reports is first base prospect Sean Bouchard. Oh deal to rox is […]