Following an exciting finish to Spring Training, the Toronto Blue Jays have carried over the momentum they picked up from Vladimir Guerrero Jr.’s memorable walk-off home run into the regular season. As the 2018 campaign is in its early going, the Jays have already received a surprising boost in their offence, while receiving steady starting pitching – both sore spots in the Jays’ rollercoaster 2017 season.

Of course, if I may use the age-old baseball cliché, it’s still early. The Blue Jays will need continued consistency from their rotation if they hope to contend for a playoff spot come September. A rotation featuring J.A. Happ, Aaron Sanchez, Marco Estrada, Marcus Stroman, and Jaime Garcia provides skipper John Gibbons with a formidable group that can compete against some of the best pitching staffs in the entire American League.

For starting pitchers to remain consistent throughout the season, the hope is that they accumulate 150-200 innings. That being said, the accumulation of innings and pitches thrown present risk factors that will undoubtedly be on the minds of high-performance professional teams, including the Blue Jays.

At Brock University, my research has focused on creating an inexpensive, easy-to-use and reliable ergonomics tool to evaluate pitching biomechanics — in simpler terms, assessing the likelihood that a pitcher may require Tommy John Elbow Reconstruction Surgery. It has been identified in a multitude of studies that overuse, high velocities and workloads, rest times, and pitching mechanics all contribute to musculoskeletal pitching injuries.

Pitchers A and B had the same velocity, same position (RP), and were the same age. Only Pitcher A had Tommy John Surgery.

To this point, the most difficult risk factors to measure are the mechanics of a pitching motion. This evaluation typically requires motion capture in a lab setting and advanced knowledge of three-dimensional kinematics. To try and simplify the process, the pitching mechanics tool (PMT) was developed to evaluate a pitcher’s body position at the instance of front-foot strike during the delivery. This position was chosen because it represents the time during the pitching motion right before stress on the ligaments of the elbow peaks. The PMT examines a variety of body positions and joint angles, including the landing foot and leg, the hips, trunk, and both the pitching arm and the glove arm. Each body segment and joint of interest was partitioned into bins that categorized posture (i.e. 3-4 postures to select from for each segment).

To acquire preliminary data and to test out the reliability of the PMT, 40 MLB pitchers were assessed — 20 who would undergo Tommy John surgery (TJS) between the 2015 and 2017 seasons, and 20 control group pitchers who were matched by age, dexterity, position (starter or reliever), and fastball velocity against the pre-Tommy John pitchers (p-TJS). 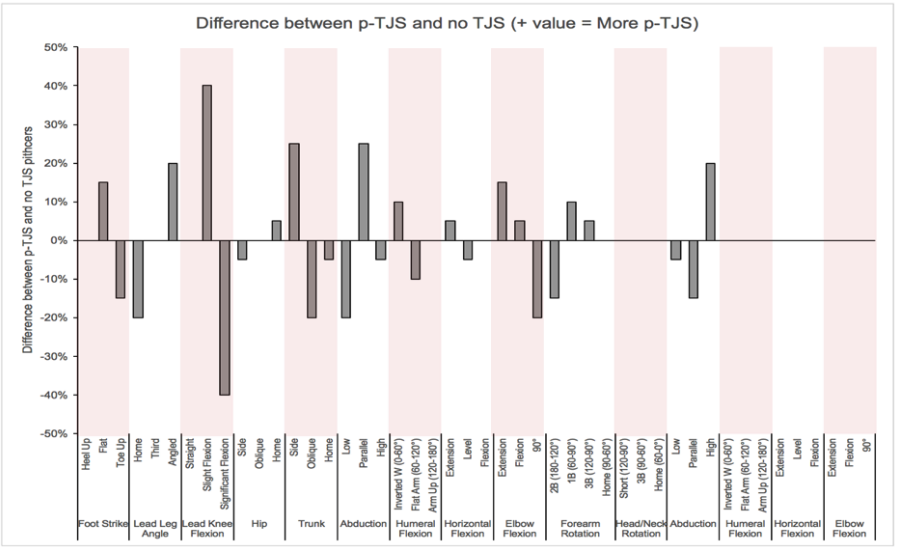 The body positions more commonly seen in the p-TJS group were given positive values, increasing in magnitude as they were more frequently seen in these pitchers. Negative values, increasing in magnitude, were given to the body positions seen more frequently in the healthy group. For interpretation – pitchers with positive PMT values had more postures associated with pitchers that had TJS, and negative values were more associated with healthy pitchers.

With respect to the pitcher’s throwing arm, those who would eventually undergo TJS demonstrated a more parallel upper arm position, a more extended elbow, and less forearm pronation than the controls. On one end of the spectrum, Nathan Eovaldi (2.875), Carson Smith (2.875) and Alex Cobb (2.625) accumulated the highest PMT scores by demonstrating a higher number of postures that we have categorized as biomechanics risk factors present in their delivery at front-foot strike. All three were pitchers who underwent TJS.

At the bottom of the list are Corey Kluber (-2.25), Joe Kelly (-2.375), and Matt Boyd (-2.375) – three pitchers who have never undergone TJS. Of course, given how this metric was created, this result is totally expected. What is more interesting is seeing how pitchers who were not part of the metric creation fared in their mechanics score — and a great candidate for testing that out would be our Toronto Blue Jays.

Now, the main question is, where does the Jays starting staff fall on this spectrum? After compiling data on the Jays’ five starters and adding them to the results from the 40 pitchers previously evaluated, the numbers looked like this:

While the biggest surprise is seeing Estrada atop the Jays list, all five starters are on the better side of the spectrum, with both Stroman and Happ very much near the bottom. Meanwhile, Estrada is a name above that of Trevor Rosenthal, the hard-throwing Cardinals closer who has recently undergone TJS. Estrada well-known for his 89 mph fastball, and with high velocities being known as a risk factor for elbow reconstruction surgery, he may not throw hard enough for this to become an issue. Remember, at this point, the PMT is assessing posture — just one of the components that contribute to musculoskeletal pitching injuries.

In the case of Stroman, the former Duke Blue Devil has come to be known for his clean and picture-perfect mechanics. Those claims have been validated by the PMT. Happ is in the same boat, with no real red flags in his delivery.

It is especially curious to see Sanchez on the better half of the list. Despite a violent-looking delivery, Sanchez has no negative indicators in his lower half actions (lead knee flexion, front foot strike, and hips rotation).

Garcia, a southpaw who already had TJS earlier in his career, showed glaring red flags in lead knee flexion, horizontal, and elbow flexion, all of which likely contributed to him tearing his UCL.

All things considered, workload, velocity, and genetic factors are also major players in the likelihood of TJS. What might be the most important factor to discuss is that this assessment was a proof of principle, and the results should be taken with a grain of salt. Assessing 3D mechanics with 2D video is a methodological nightmare, and can be deeply flawed. The goal of this mechanics tool is to rigorously test it against 3D data, and provide enough training so it could be used as an initial screening tool for possible mechanical red flags. In the meantime, hopefully it gives a bit of insight into just how the Blue Jays pitchers aim to be successful in 2018.

2 comments on “The Correlation Between Mechanics and Injury: A Look at the Blue Jays Rotation”

It would be great to see detailed descriptions of the positions that are listed on the horizontal axis of your graph.