Last December, I wrote something explaining why Marcus Stroman was poised for a breakout in 2017. In that piece, I noted that Stroman’s three fastballs had a greater separation in their movement than any other starting pitcher in baseball while all coming in at very similar speeds. That was obviously noteworthy, so I felt that by using all three of them liberally – in lieu of his previous sinker-heavy approach – he could dominate the American league using those offerings alone. While I was certainly right about his 2017 success – he currently sits fifth in the AL in ERA (3.19). 12th in DRA (3.79), seventh in innings pitched, and 12th in all of baseball in home run rate (2.5%) –  I couldn’t have been more wrong about the reason. 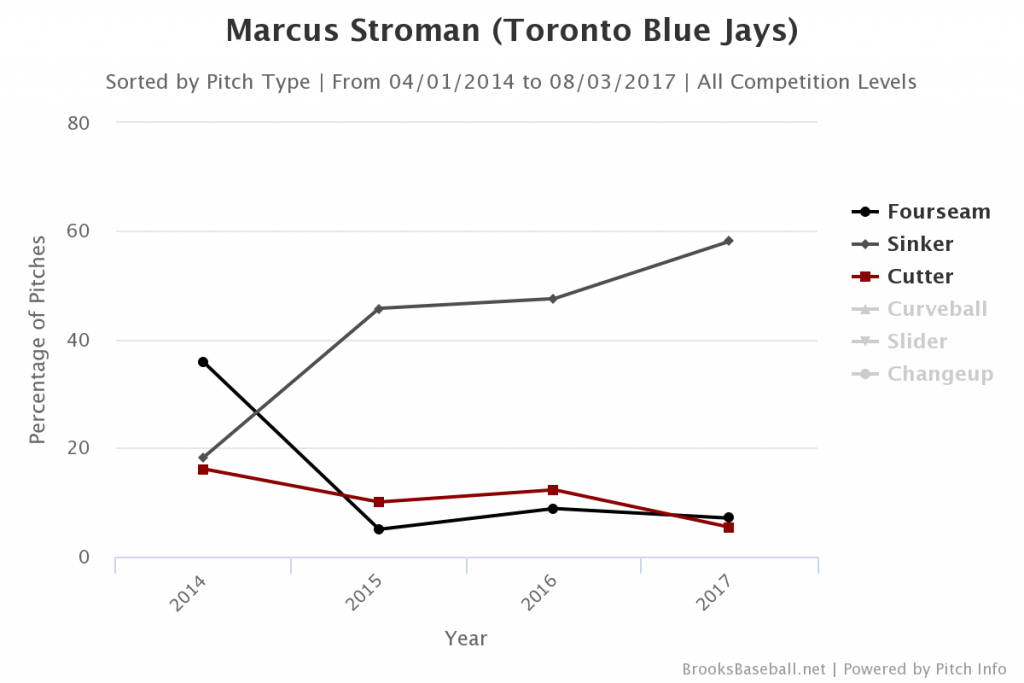 As you can see, not only did Stroman not do what I suggested, he actually went the other way, throwing more sinkers so far in 2017 than he has at any other point in his career. While I still think the other approach would’ve worked, it’s pretty clear that Stroman knew what he was doing.

As I mentioned in that first piece, it’s not hard to understand why the Duke University grad falls in love with his sinker. His pitch sinks more than all but three pitchers in baseball (was no. 1 last year), making it very hard for hitters to lift the ball. The issue last year is that he would lose command of the pitch on occasion and he would get hit a bit. That issue seems to have been rectified (2016 on the left, 2017 on the right): 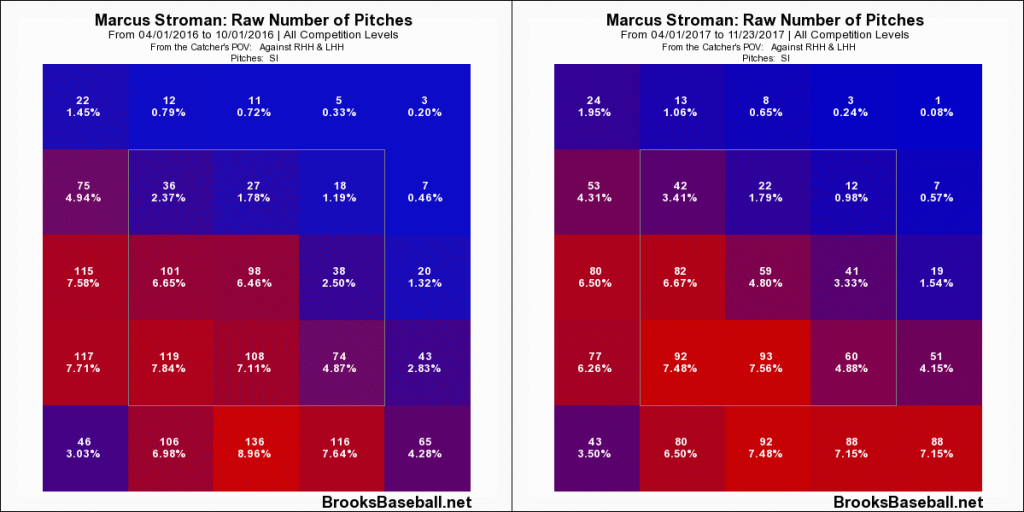 As you can see, Stroman has cut down heavily on those sinkers that run back over the middle of the plate. By working to the edges (and specifically the bottom edge of the zone), he is staying away from the fat part of the bat while continuing to do a tremendous job generating ground balls (72% on the pitch – the second best in baseball behind only Houston’s Dallas Keuchel).

It’s not just the location though. Stroman is also throwing his sinker harder than he ever has in his career, averaging 93.8 mph (up from 93.0 last year) and topping out at 97.1 mph (well up from 95.4 last year). That increased velocity is helping Stroman achieve the highest whiff per swing rate on the pitch of his career at 13.9% (see below). 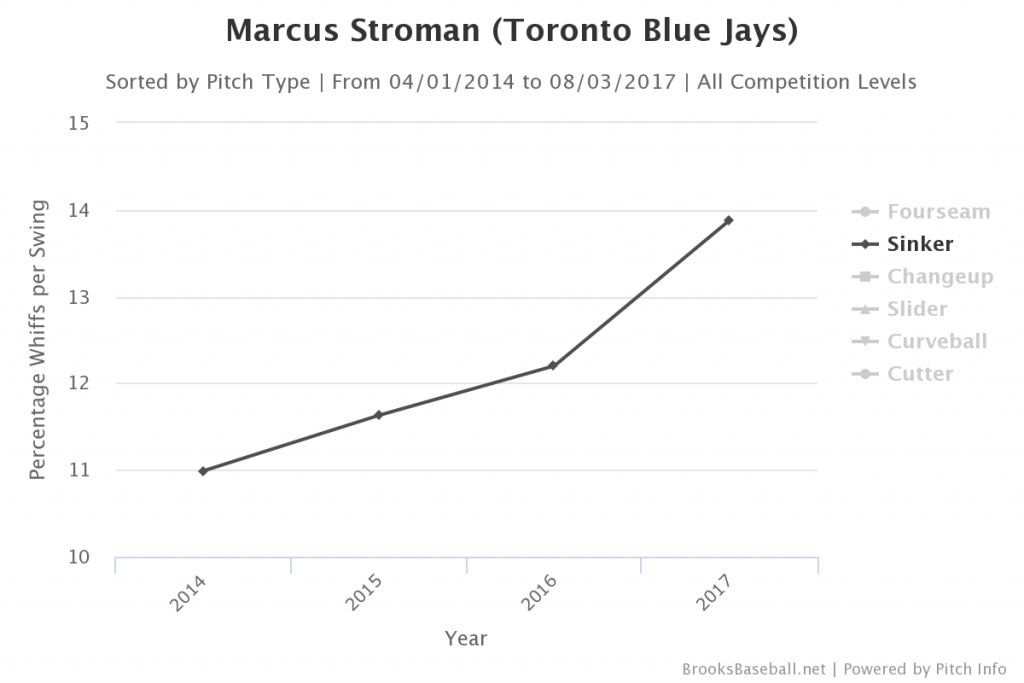 This velocity increase is benefiting Stroman’s other pitches as well. He’s throwing harder with both the sinker and fourseamer (which he rarely throws now), but his slider and changeup have actually seen drops in velocity. This is magnifiying the separation between fastball and his offspeed pitches, making it tougher for hitters to adjust to timing.

I’d like to focus on that slider specifically because that’s the only other pitch Stroman is throwing more than 10 percent of the time (18.3%, his highest ever). When he was drafted, Marcus Stroman was known very much for his slider. It was considered a major league out pitch right from the get go but the pitch began to change shape over the last couple of years, with the vertical drop almost mimicking his curveball (which Kyle Matte wrote about last summer).

This year, the slider is very much a different pitch. He’s getting more horizontal movement than ever before by an extreme margin, while also getting less drop. This makes the movement more lateral, diving away from a righthanded hitter. In essence, his slider is a completely new pitch in 2017.

To create a visual of what those two different sliders look like, compare these gifs from 2016 and 2017 of sliders with similar initial trajectories.

As you can see, the latter pitch just darts away from Carlos Correa at the last second whereas the first one has a lot more dip as it drifts outside against Cheslor Cuthbert. While the old slider was still very tough to hit, this one now has noticeably different movement from his curveball while also coming much closer to mirroring the nasty sinker.

So instead of throwing fewer sinkers and more cutters/fourseamers, Stroman is throwing more, better, faster sinkers than ever. This is creating greater velocity separation from his gigantic new slider so he can dominate the American League East.

As Matt Gwin alluded to in his comment in the Baseball Prospectus Annual, Stroman has been tinkering with his repertoire ever since his debut with the Vancouver Canadians in 2013. He has added pitches (a sinker, a cutter) and changed their shapes and altered how often he throws them. He is never satisfied with his performance and is always doing whatever he can to get better. It seems he has finally found the right combination for success.

Marcus Stroman has used improved command and two elite pitches (with a sprinkling of his other off the charts stuff) to finally become the ace we always thought he could be.

It’s a good thing he didn’t listen to me.