Half way through this season, there are many reasons to say FU. Some of them come from the Jays starters giving up another crooked number in the first inning. Some of them come from early season reliever giving up home runs to the stupid Orioles. Others come from the fact that our resident list making expert Nick Dika went for pizza and forgot to invite me to come along. However, I would like to talk a bit about a different FU – Fatigue Units, and how Blue Jay Pitcher workloads look at the midway point of the season.

Earlier this season, I wrote that I wasn’t concerned about Joe Biagini’s workload, despite him getting close to his career high in Major League Innings. Joe thanked me for this by giving up seven in the first that day, and Twitter well actually’d me to death. Turns out, Joe maybe just was having a rough month – and if you look at the Stuff report, there’s reason to think Joe will be back to his old ways in no time. The point of evaluating fatigue units is to examine how hard a pitcher is working with a bit more insight into the physiological processes occurring in the body as a result of high velocity pitches, back to back appearances, and high pitch count innings – not just total innings pitched or round numbers (like a 100 pitch count). If you’d like to get a bit more information into what Fatigue Units are – take a look here. 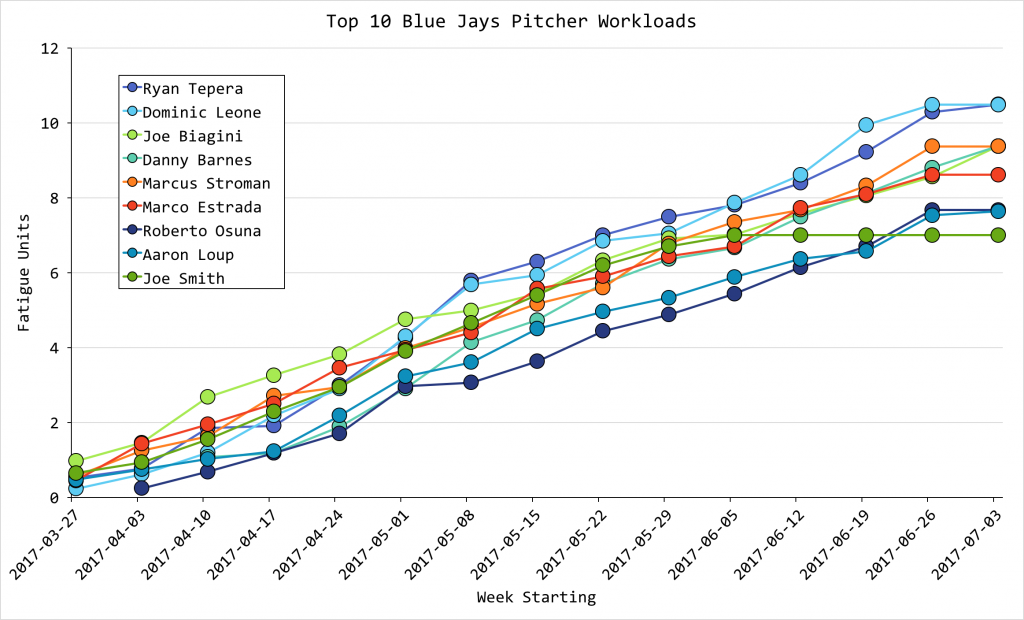 Can you imagine a world where Ryan Tepera, Dominic Leone, and Danny Barnes did not exist? You think things are bad now? Launch the Blue Jays playoff chances in a rocket, have it go to Mars, and then have them get out and explode like Arnold’s nemesis did in Total Recall.

Things would be SO much worse without these three workhorses.

Marcus Stroman shows up as the first starter in the top 10. This is because of his exceptional pitch efficiency; Stroman averages a mere 15.3 pitches per inning – only 15% of all Major League Pitchers can say they average fewer than him (minimum 10 IP). He sits 16th in total innings pitched, but 29th in total pitches thrown. This my friends, is how you work deep into ball games.

Roberto Osuna is likely one of the pitchers on this list that will finish in the top three by season’s end. Roberto has missed some time dealing with a neck issue out of spring training, and more recently his anxiety issues. With how he is pitching now, expect to see a lot more back to back to back appearances, and way more work for Osuna in the second half.

I recently wrote some unflattering words about the Jays rotation over at RotoGraphs – they rank 27th in the league in terms of Fatigue Units for their Starters. That’s because this rotation spends a lot of time bringing the bullpen to life in the fourth inning – and when you’re getting shelled that early, the bullpen is going to shoulder a lot of the workload. On the flip side, the Jays rank sixth in workload for their bullpen. They are really being put through the ringer. One thing that is a feather in Gibby’s cap however, is that while the Jays relievers are high in total workload, they have done so by having pitchers throw on back to back days 58 times, or, ninth most in the entire league. Gibby has had to go to his bullpen a lot, but he’s done a great job in reducing the strain on his pitchers.

So – the Starters are fresh for the second half – the key cogs in the bullpen have a lot left in the tank. Let’s go win some games and have another fun October!