Opening Day is upon us! That means it’s time to sell tickets. As we uncovered last time, this can’t be accomplished simply through fan loyalty to the club; people need a reason to come to the park. The easiest way: promotions.

The best promotion in the history of the world is Fireworks. Everybody loves them. Whether it’s at the lake, Fair, Halloween in a shady part of town, or on the driveway after a few drinks, no matter where they are, people stop and stare at Fireworks. It’s a team’s fastball, bread and butter, one-timer, and every other similar form of wordplay.

Unfortunately, you can’t do fireworks every game. Obviously there is risk of overkill, but they’re expensive, and there are risks like fire/burn issues, bad fireworks companies (nobody goes home happy with a bad light show), games going late and passing curfews, or game ending too quickly while it’s still sunny.

So traditionally, teams only do Fireworks on Opening Night, Memorial Day (or Victoria Day), July 4th (or Canada Day) and a few Fridays or Saturdays. That means we still need to sell tickets to another 70 (or 35 if you’re short season) games. This is where giveaways come in.

There are three reasons for this:

What to Give Away

Most good teams have three to four large, multi-year partners that do two to three giveaways a year. If those companies are smart, they’ll do a giveaway specifically for kids 10 and under. Giveaways for kids are the gold standard; even better than bobbleheads. While bobbleheads are sexier, have resale value, appeal to all ages, can be part of a collection, and can be amplified on social media, giveaways for kids are the gift that keeps on giving. 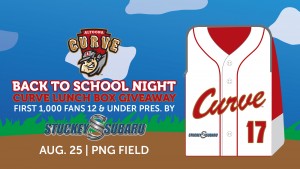 om the team side, you get kids wearing your hat or using your lunch box for years, providing built in, passive advertising. That game also creates a fun memory and a keepsake fans take into adulthood. The team then gets families buying tickets (kids can’t come to the game alone, right?) they’ll probably return for other giveaways. This makes the ballpark a ‘family activity’. Companies kill for that legitimate warmth and fuzziness.

Perhaps most importantly, that item will be in the kid’s room for years, maybe generations. Don’t believe me? Look around your family/sports room right now. Look at how many mementos and memories you have from your childhood. It could be t-shirts, hats, baseball cards, tickets, or simply a picture. Those memories are cherished, and form a solid foundation for how young fans and families become lifelong fans of that team.

There’s a lot behind the curtain when planning a giveaway, but these are the three most important factors that need to be balanced.

Just like Jerry Seinfeld says, “anyone can take a reservation.” Well anyone can also have an idea. Saw something at another park? Awesome! You know a guy who makes shirts cheap from China? So does everybody Terrific!

It’s important that the idea for a giveaway is capable of selling tickets: fans need to want it. Once you’ve got that, you need to balance finding a sponsor for the giveaway item, ordering it, and getting it shipped and delivered on time.

There will always be something new and cool (remember Beanie Babies?!), but most teams all do the same giveaway items with little variation. If it ain’t broke don’t fix it.

Well run teams have multi-year deals, so once the game schedule comes out in the Fall, they present their ideas to sponsors with plenty of time to spare.

If not, teams would need to find a sponsor to agree to do it in time. This is where teams run into trouble. They will internally commit to doing a backpack giveaway, as an example, but then may be unable to find a sponsor by March. They’ll have to ditch the backup and turn to Plan B. Plan B is never as cool and sometimes ends up being nothing at all.

This is why teams wait as long as possible to release their promotional schedule. A lot could can change from the original idea. Now, being able to go to a prospective sponsor and say, “this is what we’re doing this year,” is a fun call to make. But you can’t waste time; there has to be genuine interest with a legitimate item.

Ok, this is the fun part. Firstly, there are tons of companies that do this. If you’re a minor league GM, you probably know about five people off the top of your head that make this stuff. That isn’t the difficult part. The difficult part is finding a reputable company who makes a high quality item and delivers it on time. Shirts are easy, but complicated items like backpacks and bobbleheads take time, weigh a lot, and come in a lot of boxes. And even when you think you get it all correct, you can run in to a lot of issues.

You could find that reputable promotion company at the Winter Meetings in early December. While the MLB GMs and free agents rightly garner all the attention, the Winter Meetings also hosts one of the country’s largest trade shows, where companies set up booths with their samples and capabilities on full display.

Now, these companies send out an email the week of the Winter Meetings, telling all teams that if you sign with them you’ll get 10% off, or 2000 items for the price of 1600.

Those companies want guaranteed business because competition is stiff, it is in the team’s best interest to be organized by early December. However, it’s also tough for a team to commit to a giveaway without a sponsor because they will need one when the item is created, which is latest early March. Balance.

One time a team that a friend of mine ran ordered all their giveaways from a small, local company who promised great prices. The team wanted to support a season ticket holder. That company couldn’t handle the quantities and timelines. Two of the giveaways never showed up, another had the logo messed up.

That’s why the right promotional company is worth its weight in gold. No surprises.

Tags: Giveaways, milb |
Bennett Brauer
Follow @@bennettbrauer5
I have worked in MLB and MILB for 15 years, most of which as a GM/VP for two championship winning MILB teams across the US.
read more from Bennett Brauer