A lot has been made about Aaron Sanchez’s workload this season. He’s entering uncharted waters for innings pitched, throws incredibly hard, and is insanely awesome. As he prepares to take the mound in the do-or-die Wild Card game, I realize little has been made about the workload Marcus Stroman has endured this season – where he just crossed the 200 inning threshold. Remember when he and Sanchez were yelling about 200 innings in the offseason? It’s awesome to see their hard work rewarded.

Given the ACL injury Stroman sustained last season, a lot of his workload occurred behind the scenes under the watchful eye of Blue Jays’ physiotherapist Nikki Huffman (at the time, from Duke University). He only pitched 27 regular season innings in 2015 with the big league team. Despite the baseball reference page saying he had a limited workload for innings, he was without a doubt, using his arm.

That being said, when Stroman first came up in 2014, he was used as a reliever before getting his chance to start. This once again, limited his innings. I wanted to use Fatigue Units to examine changes in Marcus Stroman’s workload over the course of his professional career and see if 2016 was a giant spike that could lead to future injury.

First of all, I had to take a few liberties with the data set. For minor league data, there are no values for pace, starting vs. relief innings, or total pitches. So I had to make some changes. I once again used a linear regression approach, and tried to find out predictors for pitch counts in a season – using MLB data. I included games, games started, innings pitched, BB/9, and K/9 as input variables – all which ended up being significant predictors. Overall, this model produced an R2 of 0.98, with a standard error of 131 pitches. It isn’t perfect, but it will do for this application.

The equation for predicting pitches from MiLB data is:

So, we’re now one step closer to calculating FUs. For the remaining information, I used the average fastball velocity from the MLB data, and the pace from the MLB data. I assumed there was greater care given to the type of pitching appearances (for example, how Sanchez’s MiLB starts were short in duration, but still five days apart). I also made the assumption that all innings were starter innings, and used these for the calculation of MiLB FU’s. As a reminder, I am using “Predicted FU’s” – not the actual calculated FUs, so there can be an error of up to 3.5 FU’s.
For a refresher – read up here. 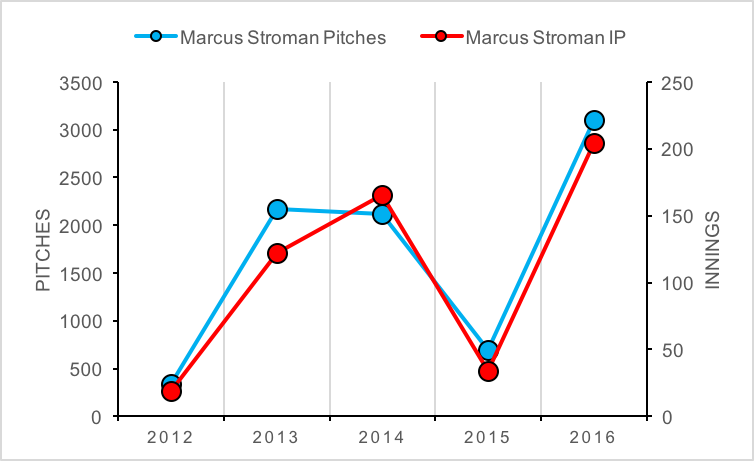 Without a doubt, 2016 is the highest traditional workload season that Stroman has seen. He has set career highs for pitches, and for innings. Compared to 2014 (his next highest season), 2016 represents a 23% increase in innings, and a 45% increase in the total number of pitches thrown.

Now, looking at FUs, the story is not nearly as daunting.

His highest workload season before 2016 saw Marcus accumulate and estimated 32.6 fatigue units, where as he sits at 33.9 FU in 2016. This only represents a 4 percent increase in peak workload. This is because in 2014, Stroman pitched more innings out of the bullpen, and in 2016, he works solely as a starter. As I had previously written – typically someone who throws out of the bullpen throws at a higher effort level than when they are a starter. This is the same for Stroman – he was throwing 95mph when he worked in relief with the Jays in 2014, compared to 93.5 as a starter in the same year. 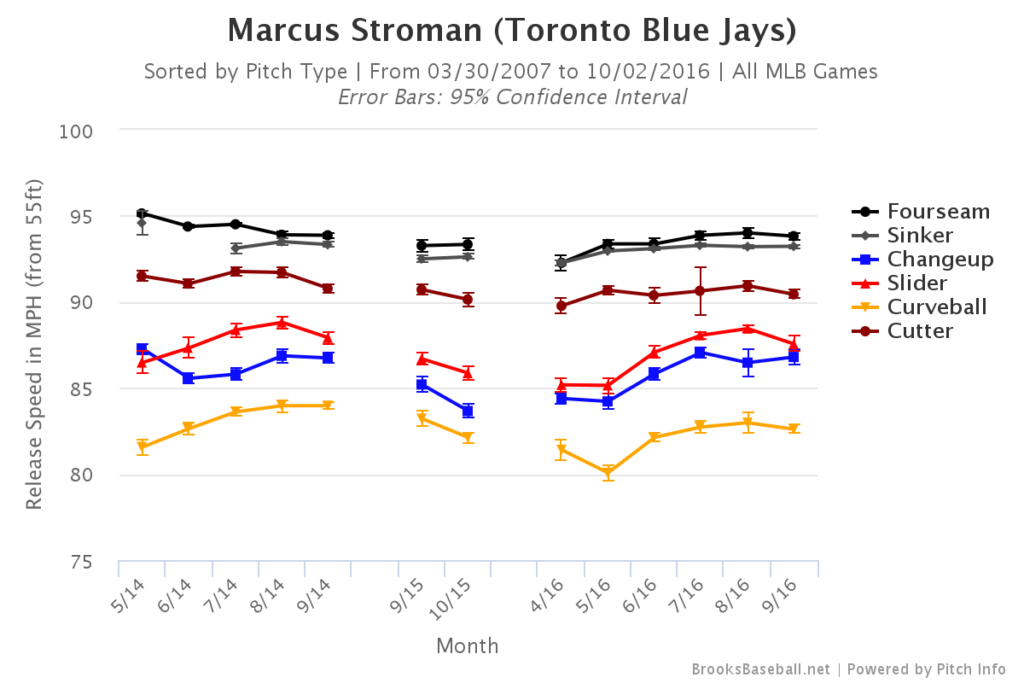 Traditional workload metrics (innings pitched and pitch counts) have long been researched, and the findings have all come back as being null – these metrics don’t help in injury prevention or prediction. Even less can be said about Fatigue Units – because there has been next to no research on this topic – other than what you have read here or on my personal website! That being said, this shows a very encouraging trend – that Stroman’s workload has been closely monitored by the Blue Jays staff and he is not showing any signs of breaking down.

I once had concerns about Stroman’s workload increase, but I am comfortable in saying that those concerns have been alleviated.