The Blue Jays have had a tumultuous September. With a record of 5-11, and a winning percentage of just .313, Toronto’s team has managed to put up on of the worst September records in all of baseball. That’s not quite what you’d like to see out of a team that should be competing for a shot at the World Series. Of course, you know this already. You also likely know the reason behind many of these poor results; Gideon Turk detailed them in a post last week. But, to me, the Blue Jays’ woes aren’t the most interesting thing about the team right now, it’s how they’ve dealt with them that intrigues.

In the month of September, the Jays have dealt with two things offensively: poor hitting and sore/injured batters. That’s been true for them more so than most other teams. Given the expanded rosters, one might then expect Toronto to shake things up; optimize usage of those extra batters on the bench. However, that hasn’t been true at all. Instead, the Blue Jays have stood pat, using their regular roster players* more so than any other team in Major League Baseball: 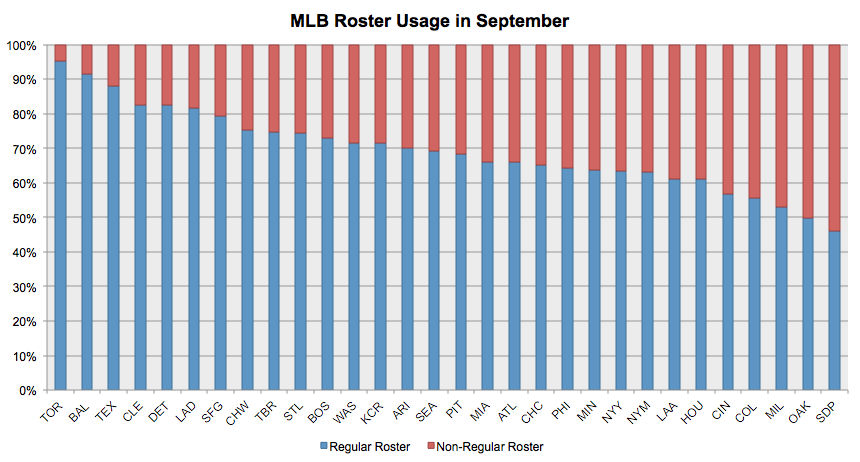 *A regular roster players was defined as having >= 300 PAs prior to September.

That fact can be taken as interesting in two very distinct ways.

Despite having a struggling offense (and defense), the Blue Jays have done very little to spread the starts around. Nothing to ‘shake up the roster'; nothing to ‘spark some performance’. At the very least, that runs contrary the clichés of any sport, which would tell you that sometimes players just hit slumps. It also runs contrary to how we’ve seen other teams around the league managed. But, is it the right thing to do?

The laws of sabrmetrics would say yes; that positive regression will come to those whose true talent level is above their present level of play. Over the long haul, that principle will almost certianly be right. But over the short term, with an eight-man bench at their disposal, one would think that the Jays would budge more than they have. This especially applies with two defensively struggling corner outfielders in Jose Bautista and Michael Saunders. Thus far the changes have been limited to a few extra games at DH for Bautista, but that’s not nearly enough.

This is inverse of the previous statement, but it has broader implications, especially for the playoffs. Beyond being an opportunity for experimentation, September has become a good managerial test for optimizing one’s roster. In some ways, John Gibbons has passed that test with the bullpen; getting use out of even the likes of Matt Dermody. However, when it has come to the bench, Gibby’s been less liberal.

As far as pinch hitting goes, the conservatism is somewhat justified…which is actually part of the problem. The Blue Jays don’t have a well-hitting bench. In turn, John Gibbons does not utilize that bench. But, the bench has other strengths; particularly in speed and defense. The question of whether or not to give others on the active roster a start is debatable; the question of whether or not to utilize them at all is not.

This lack of usage has been particularly evident on a few occasions with one of the three catchers on base. When there are three catchers available, and runners on the bench, there’s zero reason that Thole, Navarro, or Martin should be running late in a close game. The same is true of either Michael Saunders or Jose Bautista in the outfield late in the game (which Gibby has admittedly gotten better at with Jose, less so with Saunders).

At this point, there are 13 games left in the regular season. If the Blue Jays end up playing in the wildcard game (it’s likely that they will), then they could have up to 20 more in the playoffs. Over an entire entire season, logistical mismanagement means very little for a manager. But in the 13 games before the playoffs, and then in a small set of games in each playoff series, it means a lot more. This is something that Rany Jazayerli and Sports Illustrated’s Joe Sheehan often talked about on the now defunct Baseball Show with Rany and Joe podcast; managers can swing a playoff series. With that said, they also recognized that good teams could win in spite of poorer in-game management (See: 2015 Kansas City Royals).

Previously, the Blue Jays had been playing well enough to overcome having to worry about the margins. The rotation was fresh, position players were healthy, and the lineup was hitting better than ever. Now, for the Jays to succeed, they should take all they can get. With the little time left in September, Gibbons should be pinch hitting and running out the wazoo. In that way, they can take advantage of the expanded roster while it’s available, and prep for a smaller series in which similar tactics will need to be applied with a shorter bench.

Tags: John Gibbons, Toronto Blue Jays |
Matt Gwin
Follow @Matt_Gwin
Matt resides in Vancouver, where he studies Marketing, Business Technology Management, and Political Science in his 4th year at the University of British Columbia. He writes articles that delve into player analysis, provide an outlook for the future, or are about Marcus Stroman.
read more from Matt Gwin

3 comments on “The Problem With John Gibbons’ Roster Usage”

The Jays’ usage of regulars would still be high, but using 300 PA prior to Sept. to define who is and isn’t one seems somewhat curious. It causes players like Bregman, Sanchez et al not to be classed as regulars because they became regulars too late in the season to accumulate the 300 PA. But such players were regulars by the beginning of the period being measured, Sept.

In addition, while it’s interesting to see all the teams, quite a few aren’t particularly appropriate comps since the ones that are out of the pennant race and the ones with big leads are in situations where they can more easily use their expanded rosters.

Sure, there’s no perfect solution, and therefore they’ll definitely be some that don’t fit the model. But having looked at the numbers, 300 PA generally captures the desired “non-regular roster players”.

And that’s also true, but all of the teams are there; it’s a mix. You have contending teams like the Red Sox, Cubs, Nationals, and Mariners in the middle.

I agree there’s no perfect criterion and also that the one you chose is generally okay. However, I think it would have been be less imperfect to define regulars differently; e.g. players who played regularly in Aug., and also that if you’re going to use the data to suggest Gibbons’ roster usage is a problem (which I don’t strongly disagree with fwiw), then using more comparable selection parameters would have strengthened the conclusion.

There are fairly obvious factors that at least partly explain why teams like the ones you named are lower in regular usage than the Jays; e.g. CHC and WAS have had big leads and thus haven’t had to lean on their regulars as much as the Jays have, while BOS has players like Leon and Benintendi who started getting regular time too late to meet the 300 PA threshold whereas the Jays have no one who fits this description.