Most fans turn to sports as a pleasant distraction, but the 2018 Toronto Blue Jays have not offered much of a reprieve from the daily horrors of our reality. A relief corps that was the backbone of the pitching staff for the first six weeks of the season has fallen apart since Roberto Osuna was placed on Administrative Leave for what has been rumored to be deeply unfathomable actions. Since May 8th, Blue Jays relievers have thrown 118.1 innings and allowed a .259/.338/.454 slash line. Their 4.79 ERA as a group since that date stands as the ninth worst in baseball.

The slipping quality of relief pitching feels amplified now that the starting rotation is slowly getting its act together and has given the team some leads to blow. And of course, surrounding all of the pitching woes has been an inconsistent offense that, led by Kevin Pillar and Luke Maile, has been more bad than good.

All three groups have been heavily criticized – and deservedly so. They haven’t been consistent or effective, and they haven’t been particularly fun to watch. One aspect that has been largely overlooked and under scrutinized, however, is just how bad this team has been on the basepaths. As of June 12th, both Baseball Prospectus and FanGraphs have the Blue Jays ranked dead last by their respective baserunning metrics, though the precise degree of ineptitude is slightly different due to the various inputs each calculation uses.

Taking it a step further, last season Statcast introduced its Sprint Speed metric. Sprint Speed measures the speed of a player running the bases on “qualified runs,” which are considered runs of two-or more bases on non-homers (excluding runs from second on an extra base hit, when a runner would presumably ease up) and home-to-first runs on weakly hit balls (when a runner would presumably bust it down the line).

League average sprint speed is around 27 feet per second. Setting the minimum at 25 qualified runs, the Blue Jays have just five hitters above league average – Teoscar Hernández (28.6), Randal Grichuk (28.3), Lourdes Gurriel (28.2), Aledmys Diaz (28.2), and Kevin Pillar (27.8). Curtis Granderson (26.9) and Devon Travis (26.7) are just a hair below average, but the remaining seven Blue Jays are well behind. The team is particularly held back by Kendrys Morales (23.9) and Justin Smoak (23.8), who rank as third slowest and fourth slowest at their respective positions – positions which are inherently loaded with sluggish players.

We can take this a step further still by using the team-by-team situational base running numbers from Baseball Reference to figure out where, specifically, the Blue Jays have been failing relative to the rest of the league.

As a slow team, the Blue Jays stolen bases numbers are about where one would expect. Their 23 steals are the fifth fewest, and their 64 percent success rate is the fifth worst. The team has had 867 total stolen bases opportunity and has run on just 36 (4.2 percent) which is tied for 22nd. It’s a small positive, but at least the team understands how slow they are and don’t run like complete hooligans.

Some of the more interesting numbers involve the outs on the bases (which excludes caught stealing), and even more so, where the outs on the bases have occurred. Third base coach Luis Rivera has caught a ton of flak for his mind blowing decisions game after game, and the numbers support the ire from the fan base. The Jays have the fifth most outs at third base with six and the second most outs at home with twelve. The latter is five outs above the league average of roughly seven. As a whole, the Blue Jays have 28 total outs on the bases, which is tied for second worst with the Colorado Rockies, behind only the Red Sox.

Baseball Reference also provides metrics on bases taken – on wild pitch, passed balls, or fly balls – and extra bases taken. “Extra bases taken” is defined by the rate at which, when possible, a runner advances more than one base on a single, or more than two bases on a double. The Blue Jays rank 14th and tied for 25th, respectively.

The most damning base running number of all is also the one that has assuredly frustrated Blue Jays fans the most: their inability to score a runner from first on a double. The Blue Jays have found themselves in 45 such opportunities this season, and have cashed in the runner on first just eleven times. That rate, 24.4 percent, ranks dead last in baseball, and is a full 20 percentage points below the league average of 44.0 percent. It’s not just a one year, three-months-of data blip, either; they were fifth worst in baseball at 34.1 percent in 2017, too. 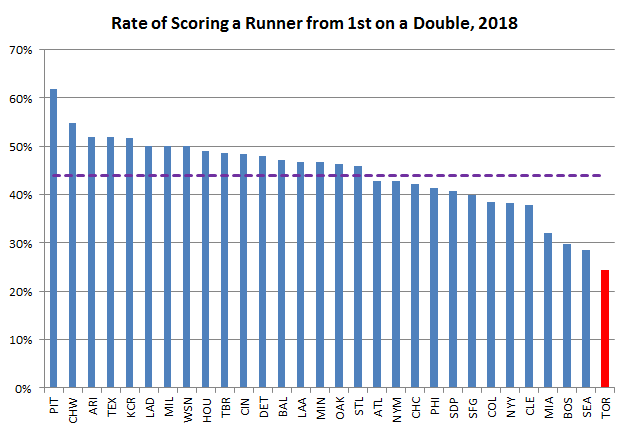 The Blue Jays front office is staring headlong into a rebuild, whether they’re willing to admit as much publicly or not. And while you’d be unwise to focus on team speed, athleticism, and baserunning ability during said reconstruction, it would be equally unwise to pay it no heed whatsoever which is what led to the current conundrum.

In the short term, the team is only going to get slower if/when Troy Tulowitzki returns from his foot injuries, as he was well below league average and the second slowest shortstop in baseball last season before another series of surgeries on his lower half. Aledmys Diaz isn’t fast, but he’s a burner relative to Tulo. Steve Pearce taking opportunities away from Hernandez, Grichuk, or Granderson would further stagnate the basepaths.

In the long term, escaping Kendrys Morales and evolving past the “dedicated Designated Hitter” and instead using that position as an opportunity to cycle through players needing rest or as a window to get another platoon bat into the lineup could be one improvement. A youth movement over the next year involving Vladimir Guerrero Jr, Bo Bichette, Anthony Alford, and Danny Jansen would be another, as while only Alford would grade as a true plus runner on the scouting scale, none of the other three would be described as slow. Regardless of how the front office chooses to go about doing it, raising the base running ability of this roster to at least league average needs to become more of a priority than it has been to date.

Note: all base running numbers as of games ending June 12th.

Kyle Matte
Follow @KyleMatte
Hi, I'm Kyle Matte. You may remember me from such websites as Jays Journal, Drunk Jays Fans, and most recently, Capital Jays. If BP Toronto were a band, I'd be the rugged mysterious one who sort of looks like Keanu Reeves, you know, if you're into that sort of thing. Wait, this is Tinder, right?
read more from Kyle Matte