At this point, there are no Blue Jays fans who are unfamiliar with Teoscar Hernández. The 25-year-old outfielder burst onto the scene with eight home runs last September, and has done nothing but hit in the early going in 2018. As such, the conversation has shifted from “how long will Hernández stay with the big club?” to “how real is this performance?”

It’s a reasonable question to ask. Entering play on Tuesday night, the Blue Jays’ two-hole hitter had put up a line of .305/.377/.677, each of those numbers dwarfing even the most optimistic pre-season projections.

So what’s real, the projections or what we’re seeing? The easy answer would be to say “both,” with an expectation for minor regression, but still worthy of starting. But when you look dig a little bit deeper, there are a few signs that Teoscar Hernández has made the necessary adjustments to be an impact bat in the big leagues.

The most talked-about change with today’s modern data usage is how hard Hernández is hitting the ball. He leads all of baseball in barrels/PA (17.4 percent) and barrels per batted ball event (25.5 percent). But he’s doing damage on the other 75 percent of his batted balls as well. His average exit velocity is up substantially. After averaging 87 mph last year, he is up to 95.7 mph this year, which is in the top five in all of baseball among hitters with at least 25 batted balls. In addition, Hernández entered Tuesday’s game with a 0 percent soft contact rate.

Hernández is hitting the ball so hard so often, he should actually have better numbers than he has put up to this point. His xwOBA (expected weighted on-base average based on contact) is .519, ahead of his already otherworldly .431. So he has been extremely good and somehow, even a little unlucky.

The next thing that stands out is the reduction in strikeout rate. Even during last year’s magical September, Hernández whiffed a whopping 37.9 percent of the time. That was a bit higher than his minor league numbers (he averaged around 24 percent during his eight years in the minors), but it was an obvious flaw in his otherwise exciting game. This year, that number is all the way down to 21.1%. Coupled with that decrease in strikeouts has been an increase in walks from 8.7 percent in his previous minor and major league career to 10.1 percent this year.

Typically, one would think that such changes would be the result of improved taking more pitches, but the case is actually a little bit different for the young outfielder. In fact, he is swinging just as often (50.9 percent of the time in 2018 vs 50.8 percent in 2017) and chasing more (30 percent up from 26.3 percent). He is also swinging at the first pitch 40.6 percent of the time (up from 28.4 percent in 2017), so he’s clearly still being very aggressive. And while he’s hitting the ball a bit more, his 67.8 percent contact rate is still among the worst in baseball.

So what’s the difference? Well, there are two. First: Hernández has stopped fouling off hittable pitches.

Of course, not all foul balls are bad. If there are fewer than two strikes, you’d usually rather see a hitter foul off a tough pitch off the plate than put it in play softly. However, Hernández was not only fouling off more fastballs (40 percent vs 34.2 percent this year), he was failing to punish pitchers for hanging breaking balls as well. This year, on breaking balls over the middle third of the plate, he has reduced his foul ball rate from 45 percent all the way down to 33 percent. As a result, he now has an average exit velocity of 95.4 mph and a .500 slugging percentage on all breaking balls after slugging .148 with an average exit velocity of 83.3 mph in his limited action last year.

This increased rate of balls in play leads nicely into the second difference: Teoscar Hernández is absolutely murdering fastballs. On plate appearances ending with fastballs, Hernández is hitting .316/.395/.763, with just a 14 percent strikeout rate. He has also upped his contact rate on heaters from 69.2 percent in 2017 to 78.1 percent in 2018. Coupled with the reduction in foul balls, Hernández is now putting the fastball in play 43.8 percent of the time. When combined with the extreme batted ball data referenced above, you end up with video game numbers.

All of this could be considered sample size silliness on its own, but there seems to be a swing change element that has led to this improvement. Last year, Hernández had an average launch angle of 19.9 degrees. This year, that number is down to 14.3 degrees. That slightly more level swing may lead to fewer home runs — and Hernández’ home run rate is actually down — but it should also lead to fewer balls fouled back caused by swinging under the ball. This shows up in the Statcast numbers, as Hernández has dropped his rate of swinging under the ball from 30.2 percent in 2017 all the way down to 12.8 percent in 2018.

With all of this increased success, pitchers have understandably started throwing Hernández a lot more junk to try and fool him: 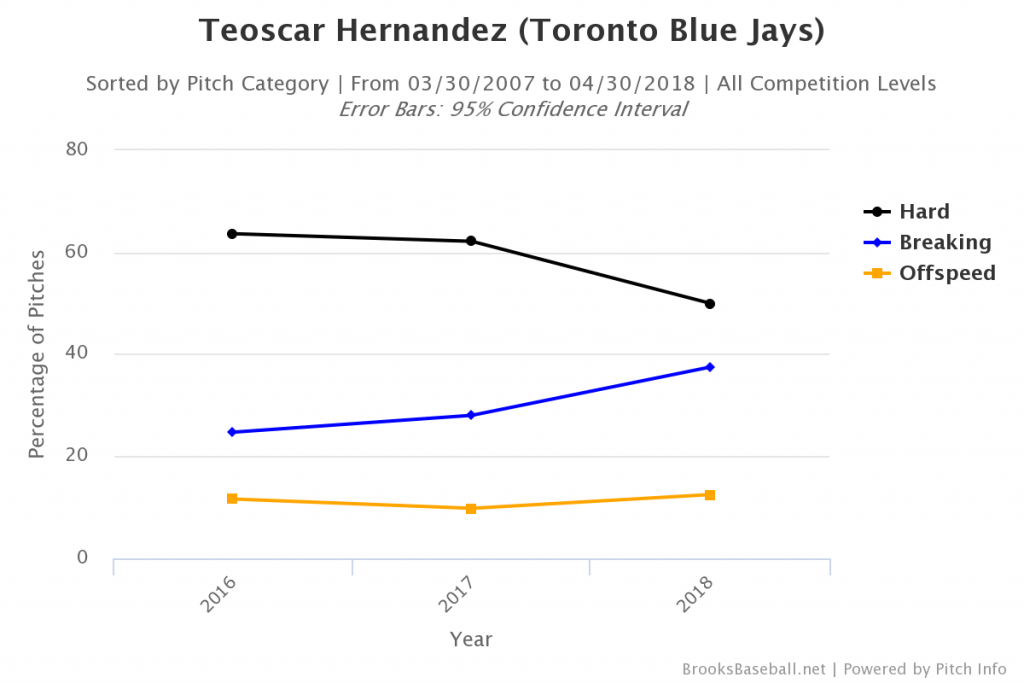 More specifically, they are throwing breaking balls off the plate in an attempt to make Hernández get himself out: 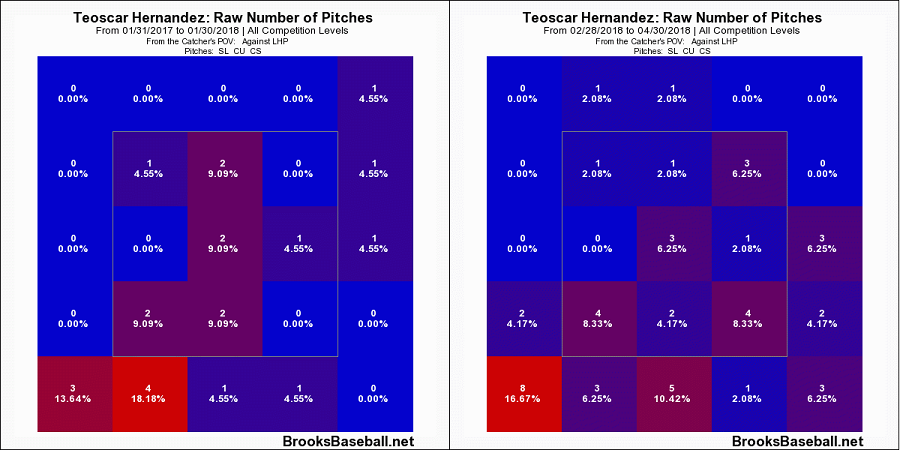 That was always an obvious step with his success against the heater. But while Hernández’ overall chase rate is up over 30 percent, that’s mostly against fastballs where he is the most aggressive and for good reason. He has actually shown a solid ability to lay off breaking balls out of the strike zone, swinging at only 26.6 percent of them. For reference, the average major leaguer chases breaking balls 5.7 percentage points more often than they do fastballs (28.7 percent vs 23 percent). So not only is the free-swinging Teoscar unusually less likely to chase a breaking ball than a fastball, he is also less likely to chase one overall than the league average hitter.

As a result, one of three things ends up happening when pitchers try to get Hernández to chase breaking balls: They either fail and end up walking Hernández (hence the increased walk rate with no change in swing rate), they get themselves into fastball counts where they are getting hurt, or they miss over the plate and Hernández crushes them anyway.

With the change in launch angle, the increased exit velocity, the increased rate of balls in play, and the increased walk rate that matches up with patience against breaking balls, the signs are actually really good that this is a newer, better Teoscar Hernández that we’re seeing, not an early-season fluke. So while these numbers likely have to come down a bit, Hernández should continue to be a very good, regular contributor for the 2018 Blue Jays and beyond.