2016 was an odd year for home runs; they went up by 14% between 2015 and 2016. The last time we saw so many home runs was in 2000, when the home run leaderboard looked like this. When this historic spike began to come into focus down the stretch last season, baseball writers had a field day trying to explain it. They enlisted physicists and statisticians. They said that the balls might be juiced. They blamed the historically bad Reds’ bullpen. They thought maybe steroids were back.

But when nobody could find a satisfying stats-based explanation for the long ball lunacy, a few writers began to turn to philosophy. The explanation here isn’t as easy as hitters closing their eyes and meditating about glorious dingers. According to interviews with several players, any explanation behind the power surge starts with the general shift in the Majors from a line drive-based approach to a fly ball-heavy hitting philosophy. Leading that group of players are Josh Donaldson, J.D. Martinez, Marlon Byrd, and Justin Turner.

This theory has two parts. The first is that it just makes more sense to go for fly balls. In 2016, batters hit .241 with a .715 slugging mark on fly balls versus a .238 average and .258 slugging mark on ground balls. The second part is that when this approach turns someone like J.D. Martinez or Justin Turner into a superstar, other Major League hitters take notice and try to emulate it.

At Fangraphs, Jeff Sullivan and Travis Sawchik have been compiling mostly anecdotal evidence for this theory that you can read about here, here and here. I won’t go any deeper into the weeds, because what interests me in this is Josh Donaldson’s role at the vanguard of this fly ball revolution.

There’s that tweet, and there’s this amazing video on MLB Network. You could argue that Donaldson has been the highest profile proselytiser for the fly ball approach, which makes Toronto the perfect test case for this theory. If I was a struggling bat in the Jays lineup, I would take every piece of advice I could from Donaldson. Players on the same team talk, a lot. That’s why the Rays pitchers all throw the same change up.

Now, the Jays are one of only six teams that actually hit fewer home runs in 2016 than in 2015. So Toronto’s offence was explosive independent of whatever mystery juice may have crept into baseball last season, but let’s see if we can find any evidence of how Donaldson’s philosophy has shaped the Blue Jays.

The best place to start is at the root of this philosophy: average launch angles. Unfortunately, Statcast data only goes back to 2015, so we can’t compare the pre-Donaldson Jays to the current core, but even the past two years are revealing. For starters, the team’s average launch angle rose from 8.8° to 10.5°. Here are the batters who gained the most lift on average.

Donaldson practiced what he preached, adding 4.5° on average according to Baseball Savant. Travis and Martin had big jumps. Encarnacion had one of highest average launch angles in the league (top 20). And at the very top of the list is Smoak, who exemplifies the kind of struggling hitter who might try to seek advice from a successful hitter such as Donaldson. Seven degrees makes me want to bust out a protractor. 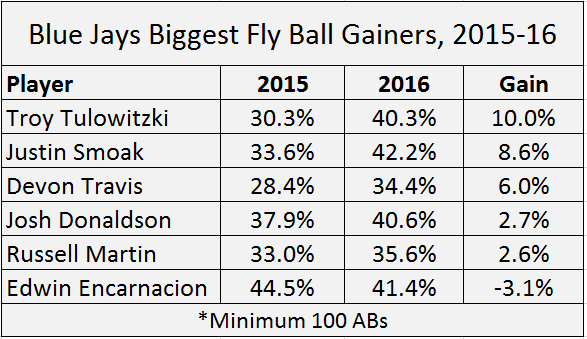 Again, Smoak and Travis saw big increases. Somehow, Tulowitzki managed to increase his fly ball percentage by 10% despite only raising his average launch angle by 2.2°. That massive jump in FB% pushed his home run total up from 17 to 24 and raised his ISO from .160 to .189, but Tulowitzki’s slugging percentage actually remained the same due to a corresponding drop-off in doubles. This could be a sign of Tulowitzki over-emphasizing fly balls at the expense of line drives to the gaps.

Of those six Jays, Tulowitzki was actually the only home run gainer on a rate basis. You might expect Donaldson and Encarnacion to take small steps back after beastly 2015 campaigns, but Smoak and Travis seemed like candidates for power surges according to their FB% and launch angle gains. 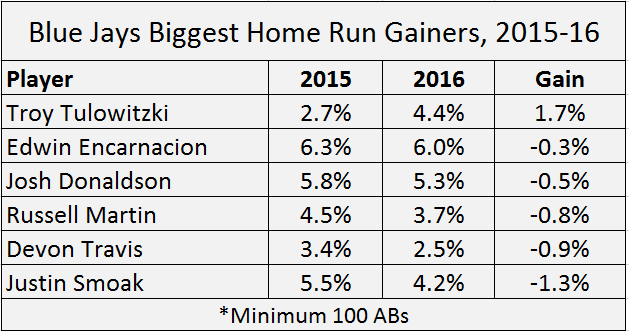 Again, we only have average launch angle data for the past two years, but for an entire team to jump from an average 8.8° to 10.5° seem significant to me. What’s more, the team’s hard hit rate jumped from 29.7% to 33.1% while the team’s HR/FB and average exit velocity remained essentially the same. That suggests that the Jays got a little unlucky with homers in 2016.

It’d be interesting to talk to Tulowitzki, Smoak and Travis to see if they’ve intentionally adopted Donaldson’s fly ball heavy approach. Looking at stats can only tell us so much. Still, if those three maintain their launch angle and fly ball gains from 2016, they could be primed for juicy home run totals this year.