It took a while, but the Blue Jays finally have a lefty for the bullpen.

The Jays have a one-year agreement with left-handed reliever J.P. Howell, pending a physical.

Source: Howell deal with #BlueJays is indeed one year, $3M.

As Buster Olney and Ken Rosenthal are reporting, J.P Howell has agreed to a  1 year, $3M contract to join the Blue Jays bullpen.

First things first, J.P. Howell is not Brett Cecil. Cecil is a strikeout artist who can get both righties and lefties out at a well-above-average level (last April notwithstanding). Once upon a time that may have been the case for Howell, but injuries sapped some of that power and made him into a groundball LOOGY. Though interestingly, there’s a case to be made that he actually outperformed the former Jays lefty in recent years:

J.P. Howell has arguably been better than Brett Cecil since 2013 and only req'd a 1-year deal. Good job, #BlueJays. pic.twitter.com/rB1m6R8MF7

Howell is coming off a tough year in 2016 with the Dodgers, however, having pitched to a 4.09 ERA in 50 2/3 innings across 64 appearances. More troubling was that lefties hit .302/.343/.417, which essentially negated his value as a LOOGY. That being said, there are a some reasons to expect a bounceback. First and foremost, lefties had a completely unsustainable .375 BABIP against Howell. This is also coming just one year removed from a season when Howell held southpaw hitters to a meager line of .224/.295/.224. As you may notice, that’s zero extra-base hits. That lefty dominance was more in line with his career numbers, where the newest Blue Jay held them to a .229/.307/.317 line for his career. In addition, Howell was an elite reliever from 2013-2015, posting a 1.97 ERA across 155 1/3 innings, allowing just 17 percent of inherited runners to score.

Finally, the crafty lefty still posted an excellent 60 percent groundball rate, so even when he was giving up more hits than usual, the ball wasn’t often leaving the yard. All of those things suggest a return to prior numbers.

There is one red flag, however: Howell’s fastball disappeared. 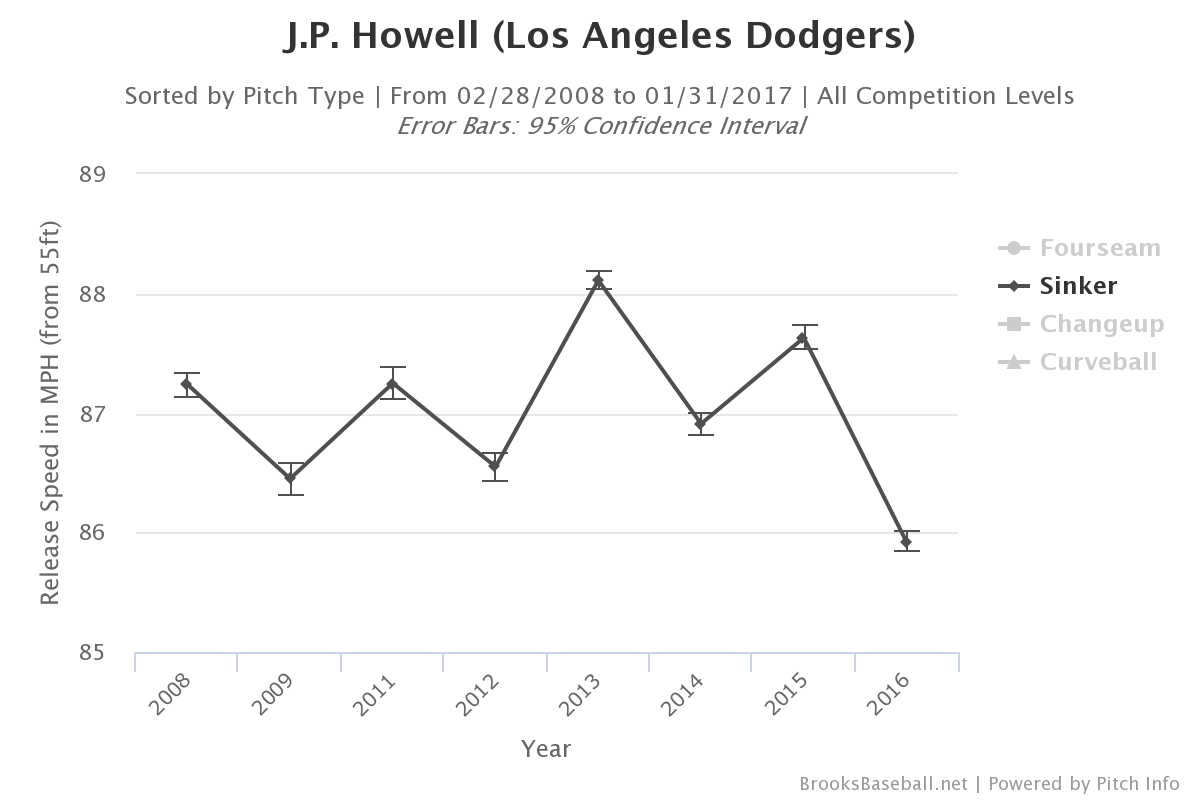 While Howell’s fastball has never been confused for Aroldis Chapman’s, and has shown serious fluctuations from year to year before, he hadn’t dipped below 86.5 mph on average since shifting to the pen following the 2007 season. His 85.9 mph 2016 velocity represented a drop of 1.7 mph from 2015, and 1 mph from 2014. While he has never relied on the big fastball, that’s obviously a bit worrying.

With all of that taken into consideration, Howell will likely still be a very solid lefthanded reliever, but just not the complete shutdown guy that he has been in the past. At three million dollars, that remains an incredible value and is a very good example of waiting out the market for a bargain to arrive.

Howell should slot in nicely to the LOOGY role in a bullpen that still needs some work, but that is starting to take shape. Roberto Osuna, Jason Grilli, Joe Biagini, and Howell are now locks, with likely roles taken by two of Gavin Floyd, Glenn Sparkman, and Mike Bolsinger.