Things certainly didn’t start well this spring for Marco Estrada. Before exhibition games even began, he found himself sidelined with a sore back caused by an errant stretching exercise. As each of the other seven men battling for rotation spots put up good outings and impressed the coaching staff, Estrada could only watch and wait for his body to heal up. Many assumed that his issues stemmed from a career high 200⅓ innings last year (including the playoffs), but when I spoke to him in Dunedin, it became clear that wasn’t an issue.

“I’ve always been a second half pitcher,so last year I felt even stronger in the months of August and September, then in October I felt great. I think if the season lasted until November I would’ve felt even better.”

“I’ve always been a second half pitcher,so last year I felt even stronger in the months of August and September, then in October I felt great. I think if the season lasted until November I would’ve felt even better.”

When asked if he had changed anything in his offseason workouts, Estrada said that he had “maintained everything the same,” so the injury was likely just one of those fluke things. Regardless, Estrada is finally back on the mound, having tossed 2 innings in a simulated game on Tuesday.

With the injury behind him, the 32 year old is facing a big year, as he hopes to repeat last year’s success. Most people and projections, PECOTA included, are expecting quite a bit of regression. That’s mostly due to the rate at which flyballs off Estrada stayed in the yard in 2015. However, the Mexican righthander has a different view on things. While some would call him a flyball pitcher, Estrada likes to refer to himself as a ‘pop-up’ pitcher.

When you look at the numbers from last year, it sort of starts to make sense. Yes, Estrada had an incredibly low HR/FB rate of 8.7 percent, but he also posted a career low “hard hit rate” of 27.2 percent, per FanGraphs. While batters were hitting the ball in the air, they weren’t doing it with any sort of power; that was no accident.

“I just try and stay away from the thigh. Over the belt, to the letters is kind of the safe area. So I try to maintain that… I’ve elevated, gotten a lot of swings and misses.”

While it’s true that Estrada has always worked up in the zone more than most pitchers, he took it to an extreme last year. The heat map on the left is fastballs from 2007 to 2014, while the heat map on the right is solely from last season. 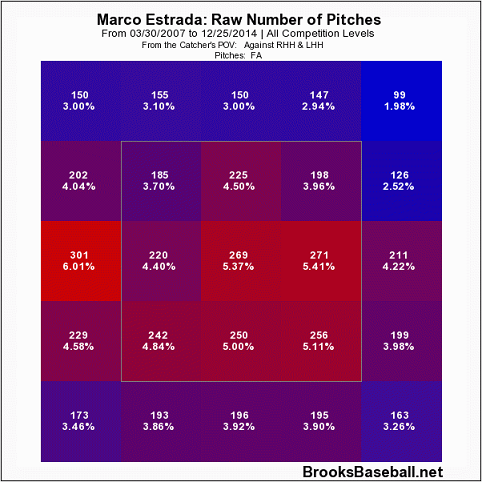 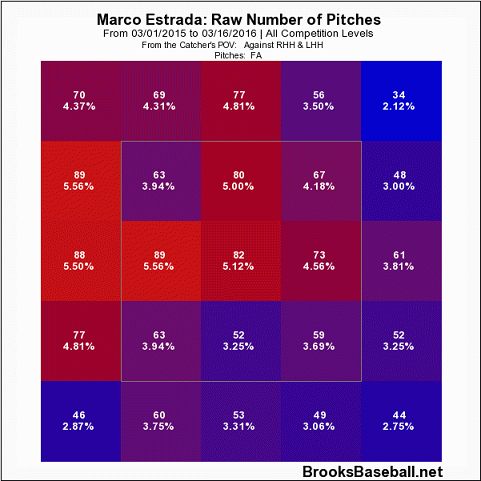 As you can see, Estrada threw above the belt more often than he ever has before. Of course, not everybody can get away with that, especially when they only throw 88-90 mph and aren’t 6’10” like Chris Young. Many attribute Estrada’s success to his spin rate, but he has another viewpoint:

“I know guys talk about how I only throw 90 mph and I’m throwing it by guys…They’re like ‘Well it’s because of your spin rate’ and I told them ‘No. It’s because I have a good changeup and it makes the fastball look harder.’ And I’ve talked to hitters, and that’s what they tell me. ‘Well dude, I’m thinking changeup and you just have to honour the fastball because the changeup is so good.’

Whether it’s spin, pitch mix, or some combination of the two, it’s very clear that whatever Estrada was doing last year worked. However, he did that work almost exclusively with Dioner Navarro, who is now handling catching duties for the Chicago White Sox. This year, Estrada will be working with the Blue Jays starting catcher, Russell Martin. Thankfully, the Jays are on the ball:

“I know (Martin) has a video with Pete Walker. I know they’ve gone over certain sequences that I had done with Navarro and to just try to get a feel for how he called the game.”

Of course, none of that should be a surprise, as Martin is a catcher who takes pride in his ability to call a game. In Jayson Stark’s piece on ESPN about the Jays up the middle defense, Russell Martin said that “[his] most important job is trying to get the best out of each individual who’s on that mound that day. And [he feels] like [he has] a knack for understanding somebody’s strengths and somebody’s weaknesses. … A lot of it’s instinctual too. It’s feel…you can go over a scouting report. But the hitter’s out there making adjustments as well…it’s kind of like jazz. There’s a certain beat and rhythm. But sometimes, it’s unpredictable. And [Russell wants his] pitcher, in a way, to be unpredictable.”

This is important, because, as you may or may not have noticed, Estrada almost never shook off Dioner Navarro. He picked up that mentality from Mark Buehrle. There are few pitchers more respected in the game than the pseudo-retired Buehrle, so Estrada was more than willing to lend an ear. The wily old lefty always stressed that it was important to have conviction behind every pitch. The important takeaway for Estrada was that if he’s asked “to throw 4-5 fastballs in a row down and a way, all [he] needs to know is if [he hits his] spot [he’s] going to be pretty successful.” This philosophy is about removing pressure. If you have trust in your catcher and conviction in your ability to execute any pitch, “it’s going to make the game a lot easier and a lot more fun.” And in the end “you’ll be a lot more successful.”

Estrada has tried to pass this message on to his younger teammates, knowing how hard things can be early in one’s career. When he first started out, Estrada’s mind “was going a million miles an hour.” And then even after trying to slow the game down following his chat with Buehrle, things didn’t switch immediately. It took “a few games” for Estrada to move his mindset from merely telling himself “whatever they call I’m throwing it” to “yep, I’m going to hit that glove.” However, once he figured it out, it made the game “a lot easier and a lot more fun.” If any of the Jays young starters take this message to heart, things could apparently go a lot smoother for them in 2016. I’m looking at you, Aaron Sanchez.

Of course, Estrada isn’t done trying to get better just because he seems to have acquired this zen-like trust in his catcher. Like any great athlete, Estrada is always striving to adapt so that he can be the best. He learned his now famous changeup in the minors (from Clint Everts) when he realized he didn’t have enough of a repertoire to get pro hitters out. Then, just last year Estrada added his current cutter, which he now feels comfortable throwing in any count. It seems Estrada is also toying with a sinker, which he has learned from Brad Penny, but only for situations where he absolutely needs a double play. He is fully aware that all of his current offerings have four-seam spin, so a sinker would assuredly stand out…and not in a good way. Still, it would be a nice weapon to have, and just another thing to put in the back of a hitter’s mind.

When you consider Estrada’s leadership, the drive to get better, and the understanding of what makes him successful, it’s easy to see why the Blue Jays were willing to invest $26M in a pitcher who’s previous high salary was $4 million.

They Blue Jays were willing to bet on Marco Estrada, and after speaking with him, I am too.

Tags: Dioner Navarro, Marco Estrada, Russell Martin |
Joshua Howsam
Follow @joshuahowsam
Joshua is the Editor-in-Chief of BP Toronto and the Co-Host of BPT's official podcast, Artificial Turf Wars. He started out playing baseball with and against many current big league players. Then when his playing career fizzled, he chose to feed his passion by instead covering the game he loves.
read more from Joshua Howsam